The Summer of Our Contentment 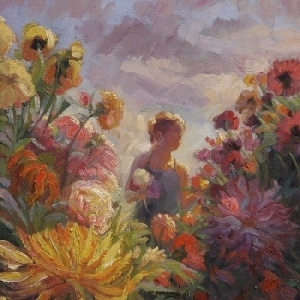 So, I’m sitting in a parked car, doing yet another one of those 20-minute chauffeur trips for the progeny that turns into 85, and I’m bored.

Ahead of me is a van with writing on it:

Whoa, that’s cool. When I’m not sitting in cars, I’ve been reading the Tony Hillerman Navaho detective series, so my first thought on seeing these elemental words is,

“Harmony with nature. Hozro. So Navaho — just like in the books.”

Poof. So much for the harmony with nature part.

Thirty feet from the van, two scrubby guys take a break from FireWaterSewageMold to eat lunch, and life goes back to being boring again.

“What’s the big deal about popping over to the grocery store and picking up some ice cream?”

It even sounds whiny on the page, doesn’t it? 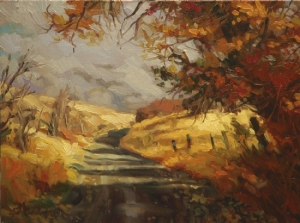 Twenty minutes there, 20 minutes back, 15 minutes in the store, and it’s the middle of the workday even though I don’t look like I work because my office is in my home and I dress casually to put it mildly but I did run a brush through my hair and slap on some makeup this morning.

Colleagues at home, I know you know what I’m talking about, even more so now because it’s summer and there are extra people in the office for the next couple months.

And if your extra people are like my extra people, they sleep late, want to know what’s for breakfast, lunch and dinner, can’t drive, and need to be taken everywhere, NOW, and I am the only legal driver that they can find.

And wherever they’re going isn’t open yet; or whoever they’re meeting isn’t there yet; or there’s construction on the only road leading to their destination; or the town is setting up its annual Vintage Car Show and has closed every exit.

At least they are old enough now that I do not have to accompany them full time to wherever they are going: for years in the summer I braved the public swimming pool during its Free Time Afternoon Play. 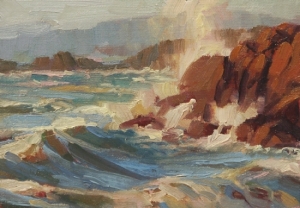 On lucky days, another mother wrested from the computer or filing cabinet would be there, and while we tread water and attempted to talk, the town’s under 12 population jumped, splashed, spit, sputtered, yelled, and “Marco!” “Polo!”ed around us.

Now and then the bored life guard monotoned, “Emily, quick whacking Jimsie on the back of the head.”

Personally, considering that Jimsie just jumped inches from our faces, screaming like a banshee (what is a banshee, anyway? And why do they scream?), I’d say Emily’s got a point here.

Nowadays, one of my own progeny is a lifeguard, not a bored one because she is watching those noisy obnoxious things like a benevolent hawk, and I toy with the idea of showing up for lap swim, but what if I do something wrong, like swerve over into the wrong lane or something?

Will I get yelled at by my own progeny?

They are powerful elements indeed, but not more so than the most dominating, unrelenting, unmitigating, unmerciful element of them all (no, not two-year-olds):

It’s something I never have enough of; it’s something I begrudge when I’m sitting in the car reading the side of a van owned by someone who seriously needs to edit; it’s something that passes by every day in a circuitous cycle that finds me surrounded by sopping wet screaming children one moment, then, in another, watching my very grown up former Flaxen Toddler level a swaggering bare chested 9-year-old Tom Cruise with The Look. 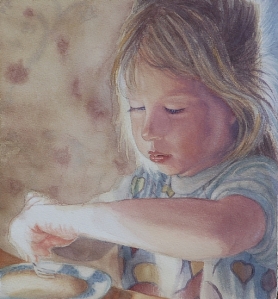 That’s my Look. I perfected it on this particular progeny. It’s a bit of my legacy, so to speak.

So. Time passes. Someday my chauffeur duties will end, passed on to progeny with progeny of his or her own. Nothing I can do about circumstances — but I can adjust how I regard those circumstances.

Let this be the Summer of my Content as I walk towards Hozro — harmony with nature.

Just not the dry rot and fungus part.

8 Responses to The Summer of Our Contentment