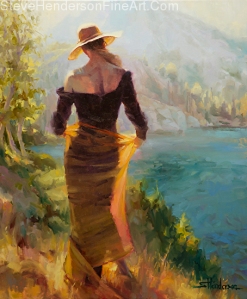 Privacy, like freedom of speech, is a valuable commodity? right? treasure? of which we are seeing less and less these days. Lady of the Lake, original oil painting by Steve Henderson; licensed open edition print at Great Big Canvas.

Lately, every time I open the mail from a government agency, or a health care provider, or a utility entity, I find an extra piece of scrap paper to write my grocery list on — a privacy notice stating how important my privacy is to these people, and how valuable information about me will not be shared with anyone but . . . appropriate organizations or departments.

Which means that I pretty much have no privacy at all, but I do have a lot of scrap paper.

In a world ruled by bankers and lawyers, government bureaucrats and insurance agencies, media moguls and societal engineers, strengthened by the IRS and TSA, Homeland Security, and a host of other cleverly but misleadingly named associations, divisions, administrations, boards, branches, commissions, and bureaus — somebody is always asking questions and demanding information on a worksheet, application, survey, or form.

When I’m not being asked questions, I am not-so-delicately being told how to think — about mandatory insurance (it’s Constitutional), genetically modified organisms (only alarmists worry about this), the state of our economy (it’s just super!), global warming (oh wait, we call it climate change now), and belief in God (it’s a psychological aberration, and people who pursue this are dangerous indeed).

And while we still have freedom of speech — sort of — to voice our opinions to the contrary, the whole concept of “hate speech” — which has open-ended potential to embrace anything the people in charge says it does — increasingly encourages many people to just shut up, and they keep their thoughts to themselves.

In the privacy of our minds — which technology has not yet figured out how to control, manipulate, track, dictate, plot, graph, manage, regulate, dominate, or restrain — we are free to disagree with what we are taught. When a movie character announces, “Green and red are the same color!” we can think, “No, they’re not,” or when the president of an organization says, “This is a good program and everyone loves it,” we can think, “You lie!”

The world is a beautiful place, but it is not our true, eternal home. We seek peace in the midst of pain. Peace, original oil painting by Steve Henderson.

But if you are a Christian, the world has never been a place where you fit in. You are weird — a psychological aberration — because you believe in an invisible Person who is everywhere, knows everything, and is in complete and total control. And you talk to Him — in your head, where your thoughts are private and only the two of you know what they are.

Understand the value of that. Get into the habit of talking to God — in your head — and asking Him about things you don’t understand. Read the Bible — on your own — and question and analyze and think about and meditate upon what you read. Gain confidence in your intelligence and acumen, and filter everything around you through your understanding of God’s ways versus Man’s, Media’s, and Mammon’s. 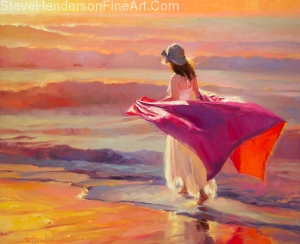 Turn off the white noise, the TV, the music videos, the network news, the clamoring voices, and allow yourself to become comfortable with silence.

In other words, think. Learning to think for ourselves is the best defense we have against others doing the thinking for us, and when and if the day comes when we are no longer allowed to speak, we can still think, and by that, not be conquered and cowed into automatons.

In so many areas, our privacy is a shredded remnant of what it used to be. Treasure what you have left, and strengthen it.

The Atheist’s Cry to God

Special Feature: 10 Ways to Be a Successful Christian (my concession to the bullet-pointed list)