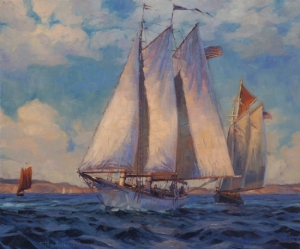 The Norwegian Artist and I have never worried about steering our little raft through the middle of the stream, which is good, since according to our four progeny we are hopelessly on the edge. The other day, however, we discovered that, without our changing any of our odd habits, we have become cool, contemporary, and whatever other words describe the opposite of what we actually are.

We did this by not owning a clothes dryer.

Our College Girl brought this new status to our attention by reporting that, according to one of her professors, hanging clothes on the line is an environmentally avante garde thing to do, and that even celebrities — or the housekeepers of celebrities — are joining in this ecologically friendly activity.

I have a difficult time imagining  Botox Babe rubbing a sun-dried towel across her face (“folding” towels becomes a literal activity when pima cotton dangles in the open air), but if the professor said it, it must be so.

(Incidentally, isn’t our daughter an English major? What type of literature is this professor having her read?)

“Can you believe it?” the College Girl exclaimed. “You’re actually fashionable.”

This is most gratifying. 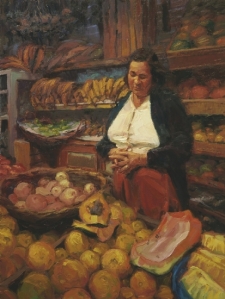 The Fruit Vendor, by the Norwegian Artist, Steve Henderson

Although I would like to say that the reason we subjected our long suffering children to crispy underclothing and socks that lean straight against the wall when you prop them there is because we, long before even Al Gore, were sensitive to the abuses on the environment — this would be somewhat untrue.

Actually, it would be completely untrue, as the reason we have never owned a dryer is that we are too cheap to do so.

It started when we were college students ourselves, holding down a half-time job between the two of us, when we stood by the electric meter and tracked how it spun when we turned on the light in the bathroom and the one in the bedroom.  Quickly determining that one of these had to go if we were going to meet that month’s bill, we were in no shape to turn on a dryer, much less purchase one.

As time went on and enough money flowed in that we were able to add salt to the day’s oatmeal, we never could make the plunge to the dryer. Or an air conditioner. Or a dishwasher. They made the meter race.

When the kids were younger this was no problem, as they accepted that one hauled the basket out to the line in the summer and creatively dispersed the clothing on a rack in the winter. On sultry days, one plunged one’s head under the faucet outside and shook out the excess, like the dog, sort of. After each meal, someone cleared, someone washed, someone dried, and nobody argued about who was supposed to empty.

As some of the children aged, however, they noticed that other people put their clothes and dishes in little boxes, and that another little box, somewhere, pumped out cold air. Also, everybody else held tiny little boxes to their ears and talked into them. And drove cars without peeling paint (“Just tell your friends that we own a Jaguar,” we advised. “It has spots.” This did not go over well.)

Day by teenaged day we became stranger, weirder, more embarrassingly outlandish and utterly outre. While it is a given, in our adolescent-oriented society, that parents be considered with condescending deprecation, we found ourselves, and our ideas, and our way of life so overwhelmingly distasteful to members of the generation below us that breakfast table conversation literally stopped (Oops — did I mention that we drank goats’ milk? Any idea how that went over?). 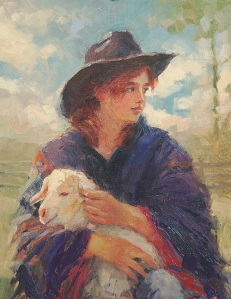 The Blue Poncho, by the Norwegian Artist, Steve Henderson

And then, one day, things began to change — not us, we still hung out the clothes, washed dishes with rags, squeezed the goats’ udders — but the teenagers began to drop out of the nest, flutter their downy wings, and attempt to fly. And as they scraped their beaks against the rocks, they remembered the story of the spinning electric meter.

A car with peeling paint didn’t seem so horrible anymore when the alternative was a four-mile roundtrip trek to the grocery, where (“My God! Look at the price of milk!”) that week’s paycheck wouldn’t stretch to cover a DVD rental, not if you wanted food with that.

When the College Girl complained about how 6 quarters bought 10 minutes of dryer time, her older sister advised her to pack the damp clothes home and drape them over the chairs to air dry. “Dryers cost a lot of money,” she told her. “Air’s free.” 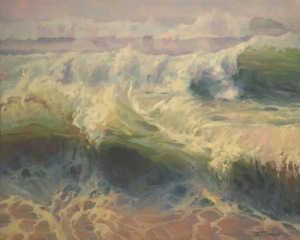