Cheap Sandals or Scanty Underwear: It All Depends upon How Old You Are

It is fitting, then, that people of a certain age — namely, mine — are dubbed the “Bologna Generation,” because we find ourselves sandwiched between our parents and our children.

Madonna and Toddler by the Norwegian Artist, Steve Henderson

Now no one can argue that Baby Boomers are not a demographic force all on our own, but this bologna situation is yet another aspect that defines us: in communicating and interacting with the generation above us and the one below, we toggle back and forth between two worlds, two ways of looking at things, two languages.

Now my parents, the Professorial and Venerable One, know that these rubbery items slip on one’s feet, anchored between the big toe and the second one, and make a whispery, slappy, flip-floppy sound as the person walks.  They also know that one does not wear Thongs to a White House function.

My children, while horrified at the public discourse of Thongs, especially along the lines of, “Will you pick up those dirty thongs of yours and toss them in the shoe bin?” see no issue with wrapping a clean thong (which, Mom and Dad, is a form of female underclothing that you might associate with a G-string), in their hair as a perky accessory — a female accessory, at this point, which has mercifully not crossed over to the metro-male.

Progeny of mine, you know Thongs as Flip Flops, and a G-string is not something you find on the guitar. It is best not to wear flip flops to a White House function, and as to wearing a thong there, do not do so in your hair, and do not discuss the other way of wearing it over pre-dinner cocktails (which, come to think of it, you are too young to partake of anyway).

This whole computer thing is another.

When I first jumped back into Cyber Earth after a 10-year hiatus, I signed up for computer software classes at the local library, and, in my mid-forties, was the fresh-faced, Homecoming Queen Babe of the class.

I knew there was a problem when one of the older women turned to another and asked, “Why are there two ‘shift’ keys on the typewriter looking thing?”

“Probably for right and left handers,” her colleague in confusion replied.

You know those dreams you still have about signing up for the Wrong Class?

Once the older generation learns the logistics of the keyboard, however, they understand the concept of not leaving a glass of orange juice next to one. They are also not prone to demand replacing their electronic library of  accessories  every year with something smaller, more portable, more fashionable, pink instead of black, named like a fruit, and with the ability to do anything and everything but actually make a phone call.

What small accessories they do have they treat carefully, as if the items cost hundreds of dollars, which many of them actually do.

Speaking of money, I remember the shock on the progeny faces when I mentioned someone investing $10,000 into a CD.

“What kind of artist gets that kind of money?” (You could almost see the wheels turning, or more generationally speaking, microchips firing, or whatever it is that chips do.)

My parents, on the other hand, still get frustrated with this shiny round item that scratches no matter how you care for it. Come to think of it, so do I.

What surprises me the most, however, is that when you put the two generations together in the same room, they are able to communicate, and they don’t need me in the middle translating. I get the sense many times that I am in the way.

Perhaps this is no more unusual than interaction with my own grandmother, Venerable One’s authentic, first-generation Polish immigrant sustenance farmer who was so busy feeding and keeping alive 11 progeny (and I think four is chaotic), that she never had time to learn English. Probably something to do with living 10 miles from the nearest town and only traveling there via horse and buggy once a year, to get the latest baby baptized by the only priest in the region. 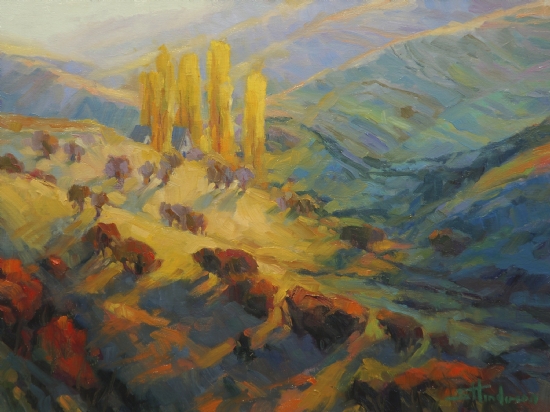 Although I never managed to get across to her that I did not need my waffle cut into 1/2 inch squares, we did spend pleasurable afternoons together, her with her one in twenty English word, me with my 8-year-old “I . . . likey . . . readey . . . boooooooooks.” I fully understood that she loved me, and I loved her.

Ah, yes . . . love. It bridges all generation gaps, and links us one to another in the unbroken necklace of life.

There’s no bologna about that.

5 Responses to Cheap Sandals or Scanty Underwear: It All Depends upon How Old You Are