The Golden Compass in My Head Is Made of Plastic

Like any married couple, the Norwegian Artist and I have divvied the duties through the years – you know, cooking, laundry, mucking out the goat pen. I’ll happily fold socks. 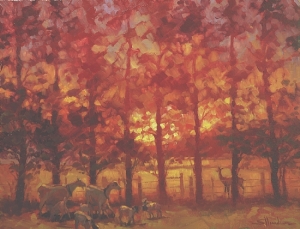 Given a choice between dirty socks and goat pellets, I'll rock for the socks. "Fenceline Encounter," Steve Henderson

On long car trips, our duties have been set in stone since he put the rock on my finger: He Drives; I Navigate.

This latter is odd since the directional compass points of North, South, East and West only make sense when I’m looking at a globe, which isn’t something you carry around in the car. To the Norwegian’s silent frustration, at 70 m.p.h. I rely less on the crumpled swathe of paper map on my lap than I do on bright green road signs.

For my part, I get disagreeable when we pass some indeterminate road and the Norwegian wants to know where it goes– not so that we can drive on it, but merely because the man is curious.

“It leads into a green shaded area somewhere around a large lake,” I tell him curtly.

Over the years, Eldest Supreme trained her siblings in the back of the car to maintain death silence while the Norwegian and I, having mistakenly taken the wrong exit, drifted aimlessly through urban streets — all one way, all the wrong direction — in fruitless attempts to find the freeway, which was generally overhead. 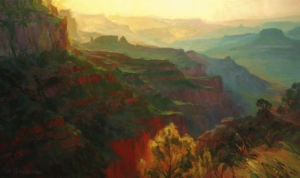 When the Norwegian Artist and I get lost, the freeway we need to be on is generally in some inaccessible place. "Canyon Silhouettes," by Steve Henderson

Regionally, as I clock hours of my own transporting the Norwegian Artist’s paintings from one venue to another, I rely upon Tired of Being Youngest to assume navigational duties, and I am struck by the realization that I am a good navigator indeed, finding it easier to memorize multiple MapQuest directions to my destination rather than argue with the Person on My Right.

It is best, however, not to trust MapQuest implicitly.

Outside of a mid-sized mass of metropolitan mayhem, I was looking for Lewis Street when the exit for Commercial Avenue rapidly approached. According to MapQuest, this was the exit I was to take. A half-mile away, however, was an exit for Lewis Street.

My 15-year-old navigator was busy with her iPod, not looking up directions, incidentally. The car was hurtling forward. Since I have a disturbingly innate tendency to do what I am told, we exited at Commercial Avenue, winding up in the middle of, not surprisingly, commercial enterprise.

I backtracked, eventually winding up behind a truck driving school, the supreme spot for asking directions.

And it would have been a grand place indeed were it not for three large, incredibly lifelike-because-they-were-actually-alive Rottweilers, guarding a seemingly empty building. We stayed in the car.

You’ll be relieved to know that I eventually got to our destination, without the assistance of MapQuest, my “navigator,” or the Rottweilers.

Returning home from across state lines the other day, I pulled over to a safe spot while I did some quick mental calculations: East or west? Atlantic Ocean or Pacific? Good thing I stopped to figure it out, or I would have eaten dinner in Canada.

This is so true in the same way that my first two kids, both daughters, felt like boys when I was pregnant with them. Or the third one, the son, felt like a girl. After having the fourth one, I announced to my husband and midwife — “Oh, it’s a boy!” 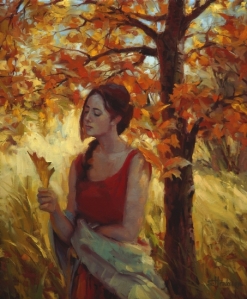 Seriously, how did I mistake this one for a boy? "Contemplation," by Steve Henderson

(“She,” by the way, is my recently unemployed navigator.)

Given my lack of instincts in the matter, I really shouldn’t depend upon my feelings when it comes to predicting the gender of a child or determining the direction in which I’m heading.

Sign up for more Middle Aged Plague in your e-mail inbox, or check me out on Kindle.