It’s the LIttle Things That Drive You Nuts

Yesterday was one of those days when nothing went right, and I wouldn’t have noticed it if it had. 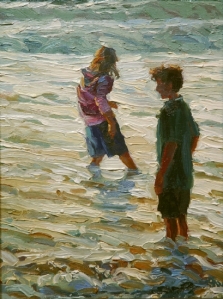 The details don’t matter, as I’m sure you have your own version of special days like this: the toilet overflowed, the dog ran out of food, people streamed in and out of the door constantly interrupting my work (as if this is anything new), I was tired, couldn’t find my left flip flop (it was in the bathroom; its mate beneath the dining room table — something to do with Toddler visiting, I imagine; come to think of it, maybe she had something to do with the toilet, too), lunch’s potato soup was anemic and listless, the check didn’t arrive in the mail but the bills did —

My major concern was that 24 hours wouldn’t be enough to fit it all in, and the extras would spill over into the next day.

Obviously, none of this stuff is major, but an overwhelming compendium of trite, trivial, bothersome details running into the back of one another and knocking down the living room lamp (that didn’t happen, fortunately) sets the mood and tone of the day in such a way that the best thing to do with it all is to drag yourself into the evening and call it all done.

Eight p.m. found me literally rolled up in the hammock (it was cold), swinging back and forth . . . back and forth . . . the hypnotic pendulum movement disengaging conscious thought. If I wanted to be spiritual about it, I’d say that I was “being still and knowing that He is God,” but I wasn’t knowing much of anything by that time other than that the dishes were done, the laundry put away, the e-mail inbox addressed, the dog fed with the new bag of food, and the Toddler — thank God and the Norwegian Artist, the latter who took control of this part — read to and tucked away for the night. One hoped. 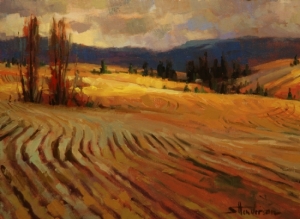 Finally, a break in the day, and relief from the storm of inconsequential yet draining events. Break in the Weather, available as an original and signed print, framed and unframed, by Steve Henderson.

On my way inside — to my book, jammies, and early bed (which I appreciate although the Toddler does not) — I stopped to visit the box of unwanted kittens from the most recent unsolicited pregnant stray cat dumped off at our country home (Life Is a Gift), and I did something I haven’t done for a long time:

I sat on the ground, scooped up the kittens, and played. While the mother cat wasn’t enthusiastic about this (up to this point, she’s managed to keep them all — by sinister growls — huddled in that box; “It won’t last,” I try to tell her) — I had fun, and so did they.

I flopped them over and checked their genders — they all look like boys to me, but what do I know? I’m just the daughter of a microbiologist — kissed their noses, felt their scratchy little claws on my bare legs, and totally lost myself in fur and felines. I felt like I was eight-years-old again.

I don’t know how long I was there, but for the first time that day, the minutes fled effortlessly by, and by the time I tucked everybody back into the box, where it looked like they had no intention of staying, I was breathing normally again. 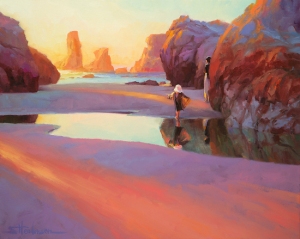 Book, jammies, bed, sleep — and I find myself in tomorrow today, with a working toilet, still no check, a better breakfast than yesterday’s lunch, and a box of active kitties ready to play when I am.

Little things. They can drag you down or build you up.

Heads up: Thirty of my essays in Kindle friendly version will be appearing soon, entitled Life Is a Gift, and featuring a painting of the Norwegian Artist after every chapter. I’ll let you know when the e-book is out on this site, but you can also find out on my Facebook Page, Linked-In, and Twitter.