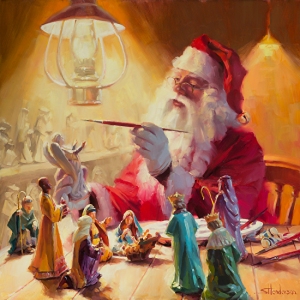 From Start Your Week with Steve, the weekly newsletter of Steve Henderson Fine Art

“This last week, it was 100-plus degrees outside, and since my studio is not air conditioned, it wasn’t much less than that inside.

“And I am painting Santa Claus.

“Things could have been worse. This could have been the day of the photo shoot — which was fortunately around a mere 80 degrees — and the Santa models (there were two) would have found their bright red jacket, warm fur lined boots, and non-sensible cap, even warmer than they were.

“Not to mention the little girl, our granddaughter, who worked with the models and will appear in future paintings (one of which is just about done and shortly to be posted). As articulate as she is for a four-year-old, I still have no idea of what she thought of her afternoon with Santa 1 and Santa 2.

“Christmas trees, which are fairly rare on the market in July, didn’t pose a problem on our property — one of the fir trees needed topping, although I think it would have appreciated the job being done in the winter, while it was dormant. Five minutes after putting the tree up in the studio, the entire building smelled like Christmas.

“Some people keep their Christmas decorations up all year round, and I think I am beginning to understand why: there is something magical, happy, and liberating about Christmas, and it’s worth remembering all year.

“During the actual season, we enjoy the lights and the warmth and the sounds, and everybody seems to be in a good mood. Peace on earth and good will toward men doesn’t seem like such an unreachable goal.

“But then December 26, with its immediately after the season sale, arrives; one week later it’s New Year’s Day with its resolutions and the determination to never eat candy again; one day after that, we’re all back in the office and the magic is gone.

“It’s July. When is the last time you felt that magical sensation of Christmas? Was it . . . more than six months ago?

“Take a moment. Close your eyes. Think of the snow, the cobalt blue nighttime sky, the twinkling lights in the shops, the music, the smiling faces of busy people planning the perfect gifts for the people they love. Think of the Nativity, the sense of hope, the joy.

“Just for a moment, celebrate Christmas in July.”

Read the rest, and subscribe, at Start Your Week with Steve.

Available in paperback and digital format at Amazon.com

Find my (Carolyn Henderson’s) latest book, Live Happily on Less, at Amazon.com. Those of you who have read me for awhile know that I don’t believe in quick, dirty tips and tricks, “secret” solutions to complex problems, or bullet pointed list.

But I do believe in contentment and joy, two things that my family and I enjoy together. Despite not being multi-billionaires, we live happily, using the resources we have been given to the best of our ability. I wrote Live Happily on Less to share with others how we do so, and to encourage them to find their own path to economic contentment.

Live Happily on Less costs $12.99 for the paperback (although Amazon usually has it on sale) and $5.99 for the digital. My rule for buying a book is that if I can get one good thing out of it, then it’s worth the purchase price. Go to Amazon.com, look inside the book, review the table of contents, and check out the sample chapters. If you like what you see, then I’m betting that you’ll find at least one good thing to get out of it. Questions? Write me directly at carolyn@stevehendersonfineart.com.