Left Behind: Is It Obligatory to Attend this Movie?

It’s not that long ago that Christians were urged to see the movie Noah, starring Russell Crowe and produced by atheist director Darren Aronofsky, who described his cinematic efforts in a March 24, 2014, Washington Times article as “the least biblical biblical film ever made.” 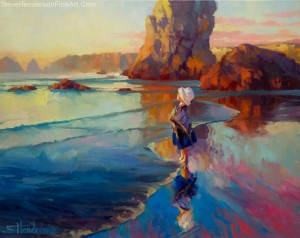 Have you ever returned home, alone, to an empty house and wondered — “Did the rapture happen and I was left behind?” Bold Innocence, original painting by Steve Henderson, sold; licensed open edition prints at Great Big Canvas, Framed Canvas Art, and iCanvasART.

Despite the (deliberate) inattention to spiritual, historical, and literary accuracy, too many Christians agonized,

“Should we go? Should we support this movie — even though it’s not precisely Biblically accurate (that’s an understatement) because we want to encourage the movie industry to make more of these films?”

Well, the industry is making more of these films —  and the chitter chatter for Left Behind, starring Nicholas Cage and directed by Vic Armstrong, is on high volume.

Duck Dynasty’s Willie Robertson, who reminds me of some relatives I’ve got living deep in hillside crevices and cracks, is on board to urge Christians to “bring some friends and family to see this movie — people who need to see to believe.”

So powerful is this “action packed thriller that will take viewers on a wild ride to the day of Rapture,” that it’s our obligation, really, to go, because according to Robertson:

“I believe people are gonna make that life-changing decision to follow Christ on the way home from the theater.”

Good heavens. With an encomium like that, how could we possibly keep ourselves, and our unsaved friends and family away?

Well, there is concern regarding Nicholas Cage, about whose spiritual beliefs some speculate, although it really shouldn’t be that difficult:

Three words, easy to say. Most of us manage to articulate one sentence or the other.

And the director, Vic Armstrong, whose hand rocks the cradle on this project — is he a Christian, or not? Look up, “Is Vic Armstrong a Christian?” and see all the information about his spiritual beliefs that you don’t get. (The FAQ’s on the Left Behind website describe him as “a veteran filmmaker in the action genre.”)

For those who don’t think it matters, when one makes a movie explicitly designed for Christians (and the money they provide by buying tickets, t-shirts, beverage tumblers, baseball caps, wrist bracelets and the ubiquitously obligatory — and financially lucrative — “ministry study resources”), only a fool would say that it doesn’t matter.

When the movie is hyped, tweeted, and pushed as bringing “Biblical prophecy to life in modern times,” and when the people pushing the production announce, “Here’s how you can use Left Behind in Your Church,” then isn’t a determination to be spiritually accurate — and indeed, spiritually sensitive to the point the somebody in this media circus is openly, loudly, and definitively a follower of Jesus Christ — important?

Let’s go back to Willie Robertson, although 1:28 minutes of him on a propaganda video clip is 87 seconds more than I can handle, and his statement that we need to bring people “who need to see to believe,” to this production because “opening the door to unbelievers has never been this much fun.”

“Unless you people see miraculous signs and wonders, you will never believe,” Jesus says in John 4: 48.

He also observed: “Blessed are those who have not seen and yet have believed.” (John 20:29)

While it’s tempting to think that all we have to do is buy a ticket (and a t-shirt, and a beverage tumbler), sit on our tushies, eat popcorn, drink pop, and answer our unsaved loved ones’ breathless questions, after the movie, about, “What must I do to be saved?” this is akin to dragging people to the church potluck, dumping them in front of the pastor, and saying, “He’ll tell you everything you need to know about Jesus.”

The major difference between the two is that, in most cases, the pastor makes a point of unashamedly affiliating himself to Christianity and Jesus Christ, while the movie’s promotional sites and FAQs, dance around the subject.

“Movie and licensed products are a way to share the subject of the rapture and the end times with friends, family, and strangers alike.” This is from the Left Behind Merchandise page, where the film is described as being, “based upon the New York Times Best Seller.”

Nothing wrong with that. Just wanted a clarification.

So, how are you feeling? Do you  feel pushed, prodded, manipulated, coerced, and pressured into supporting this movie, because it’s purported to be “Christian”?

If you do, well, as Nancy Reagan admonished — about a different product — “Just Say No.”

Stay behind. Read a book — maybe Revelation, which most of us avoid because it’s extremely complex, highly controversial as to its interpretation, and quite incredibly difficult to understand.

Thank you for reading me. Normally, I post a link to articles on another site, on this site, but this time I am printing the entire article here.

If you’d like to read me in book form, you may enjoy —

The Misfit Christian (my book designed for truth seekers who feel left out and ostracized from church culture, because they ask too many questions)

11 Responses to Left Behind: Is It Obligatory to Attend this Movie?