Nowadays, dystopia is the rage. Books like The Hunger Games, Divergent, and The Maze Runner seem written for the sole purpose of being turned into movies, with a concerted effort to engage today’s youth into the idea that life, and the future, are hopeless. 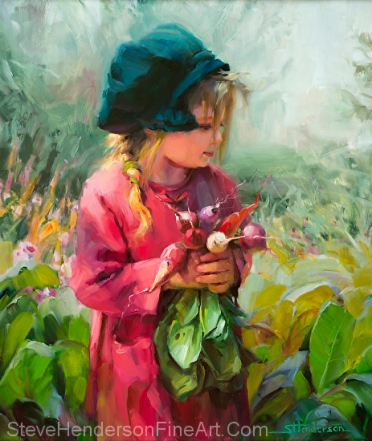 Children are especially susceptible to teaching, and it would be wise to consider what it is that they are being taught. Child of Eden, original painting by Steve Henderson; licensed prints at amazon.com, Framed Canvas Art, and iCanvasART.

In the last year, we’ve watched a number of these  depressing, dark, unhappy movies that — two or three sequels from now — promise to end on an equally disquietingly dispiriting note, with the bad guys taken down, sort of, but no real hope for rebuilding the future.

Which leads me to wonder — why this fascination with the dystopian world? And why does this message seem to be targeted toward young people?

And following this train of thought, I wondered further — what kind of message was I fed, quite a few years ago, when I was part of the younger generation? I remember — I learned about divorce and how it was normal and even healthy, dysfunctional relationships that were somehow supposed to be funny, and the genuine warm caring attitude of anybody in the police force or FBI.

In my youthful, formative years, what I learned about real life — or what I thought was real life — I learned from TV and movies. So, though the names of the actors have changed and the subjects of the shows and movies are different, the promotion of this idea — that mass media addresses and represents “real life” — hasn’t changed.

Thankfully, what has changed is me (or I, if you want to be politically correct). I spend little time with mass media, and once we had run through every David Suchet Poirot movie on Netflix, we turned to one another and said, “Well, I’m done. How about you?”

There are better things to be done, like washing the dog, only she’s a short hair and keeps herself clean, and if more people opted for a decent book (Jane Eyre is a timelessly excellent book) over keeping current on anything and everything at the theater or on TV, perhaps we, as a nation, would be less affected by the opinions and beliefs of the people who create the stuff that we call entertainment.

You can read the whole thing at my Commonsense Christianity column at BeliefNet, Mass Manipulation by the Mass Media. 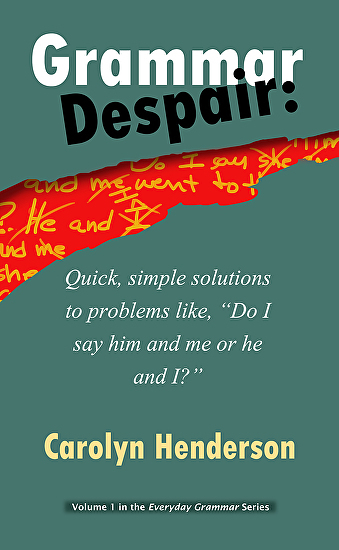 If you get flummoxed by whether to use He and I or Him and Me, Grammar Despair was written for you. It addresses some of the major issues we encounter, especially in writing. Kindle and paperback at Amazon.