Posted on February 6, 2015 by This Woman Writes

It’s no surprise that we’re lied to all the time. Anyone who follows politics in any manner at all readily acknowledges that politicians lie. 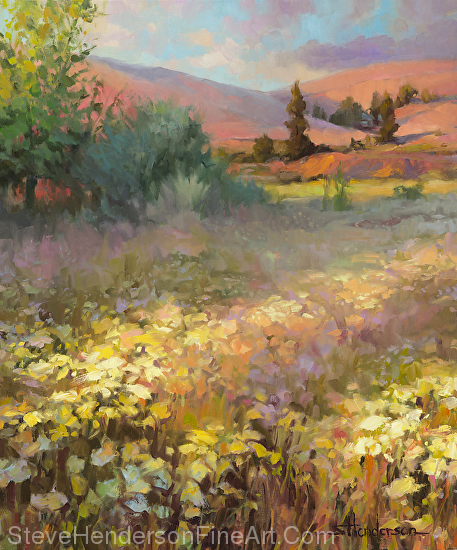 The interesting thing about evil-minded people is that their dominion does not last forever, and their lives are as brief as that of the flowers of the field. Thank God. Field of Dreams, original oil painting by Steve Henderson; licensed print at Framed Canvas Art.

All sorts of people lie, and this, again, is no surprise to us.

What is a surprise, or a shame, actually, is that we so readily accept lying as a reality of our culture that we don’t get disturbed by it, and indeed, phrases like caveat emptor (“Let the buyer beware”) speak volumes about our attitude regarding deceit, deception, misinformation, disinformation, and lying:

“Oh well,” we shrug. “If you’re dumb enough to believe what you’re told, then it’s your own fault if you get cheated.”

It’s no accident that this Latin phrase comes to us from the Romans, upon which we base our governmental system which we call a democracy, but is no more of a democracy than the republic, and later empire, of Rome. This latter is the place, after all, that worked seamlessly with the Jewish leaders to bring about the crucifixion of Christ.

“But we are a Christian nation!” people insist upon saying, although where they get this is a bit of a mystery. No doubt from the history they were taught which . . . they accept as gospel truth because it was given to them in a high school textbook.

But back to lying, which we haven’t really left:

We are lied to all the time, and rather than roll our eyes and cynically accept that this is the way life is, and savvy people recognize, embrace, and work with this system, maybe we should nod our heads, yes, and fully understand that we live in a world of lies and need to be aware of their existence.

And then, rather than play with the system, because that’s the way you get ahead in the world of men, maybe we as Christians should go a step further, be smart about it all, and stop believing the lies.

“There are six things the Lord hates, seven that are detestable to him,” Proverbs 6:16-19 says:

“Haughty eyes, a lying tongue, hands that shed innocent blood, a heart that devises wicked schemes, feet that are quick to rush into evil, a false witness who pours out lies, and a man who stirs up dissension among brothers.”

Offhand, this list sounds like it encompasses our political system, educational establishments, corporations, the industrial military complex, financial institutions, the religious arena, mass media, agribusiness, the entertainment industry, insurance companies, slick advertising campaigns, and the legal system — in short, any and every area in which man asserts his dominion.

And while not every person, in each of these areas, is lying, it’s a given that the central message, from the top voices, might need to be looked into carefully before any sense of credence is given to it.

We’re called to be wise as serpents, innocent as doves.

Not the other way around.

Please read more about this topic in my Commonsense Christianity article at BeliefNet, Does It Bother You, That People Lie to Us?