We live in a world that worships movies.

And while many Christians would swear up and down that they worship nothing but God and have no idols, honest people stop and admit that popular mass media affects, generally in a non-positive way, how we see our lives and interpret ourselves. 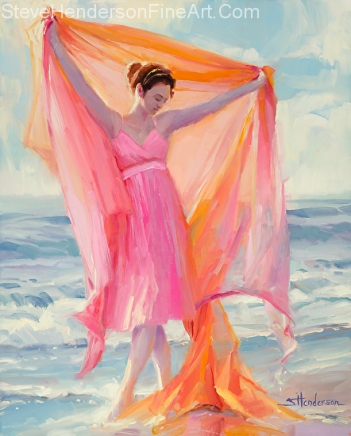 She doesn’t look like a warrior, does she? But most of life’s battles don’t happen where we think they do, and those who fight with grace, trust, hope, and faith, make it to the end. Grace, original oil painting by Steve Henderson; licensed prints at Framed Canvas Art and Amazon.

Three hundred years ago, people riding a horse across a meadow didn’t hear a soundtrack in their head.

We want to be brave, we want to be adventurous, we want to be bold — we want to live a life with meaning and direction, and if we don’t watch ourselves, we fall into the trap of looking to the imaginary world of movies as the place to find this.

But the place to find meaning in our life is with the Creator of that life, and while that sounds remarkably trite and oh-so-Christian, it’s quite sensible, actually, far more sensible than defining ourselves by characters in a film, or worse yet, by the actors who pretend to be people they’re not when they play characters in a film.

“Therefore, put on the full armor of God, so that when the day of evil comes, you may be able to stand your ground, and after you have done everything to stand,” Paul tells us in Ephesians 6:13.

The imagery of this is very Middle-Earth-like, resembling the characters and story line of The Lord of the Rings series, and those of us who enjoy the movie (and yes, I loved, and still love, the books, first) are inspired and encouraged by the mighty acts of valor, performed within a stirring soundtrack and stunning cinematic detail, that even the smallest of Hobbits put forth in this film.

But it is easy to forget, from our position on the couch, that life, real life, doesn’t generally look this way, and even if it did, the ratio of exhilarating adventure on a physical battlefield to the ordinary tasks of life is small. Most of our lives are spent doing the ordinary things it takes to live that life — driving to work, doing whatever it is we do for work, preparing meals, washing dishes, emptying the garbage, swishing toilets.

These mundane, necessary jobs are not the stuff of epic movies (which is why we don’t see them happening in movies, unless the character is trying to show us what a regular, ordinary guy he is), but they are the stuff of life, and the bravest people are those who look least like characters in movies (or “reality” TV shows): the bravest people are those who roll out of bed to go to a job they abhor because they have people in the family to feed, who deal with chronic illness or pain and insist that it will not define who they are, who care for a loved one who will never get better and who other people are embarrassed to be seen with in public, who walk tall into a room where others have just been gossiping about them, who deny themselves a small treat because this month’s finances just won’t stretch that far and someone else needs new socks.

Bravery does not exclusively involve war scenes and military uniforms — indeed, most of the time it does not. Bravery involves getting up when we are knocked down, and continuing to walk.

“Be joyful in hope, patient in affliction, faithful in prayer. Share with God’s people who are in need. Practice hospitality,” Paul exhorts in Romans 12:13-16.

“Do not be proud, but be willing to associate with people of low position. Do not be conceited.”

These are acts of bravery, but not the kind exalted in movies, and most of the time, they are not seen, or recognized, by crowds of adoring people. Our Father, however, who is in secret, sees our pain and struggling and determination and effort, and He walks with us as we walk. With Him at our side and in our hearts, we are brave.

To read more on this subject, please follow the link to my Commonsense Christianity article at BeliefNet, Are You a Brave Christian?