That Incredible Thing You Do (and Make)

When is the last time you made something with your hands?

Better yet, when is the last time you valued something that you made with your hands? 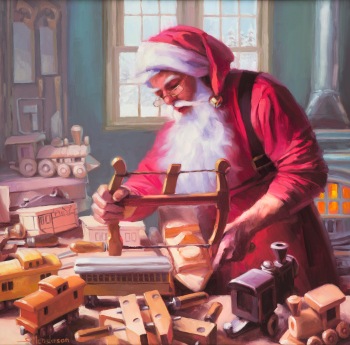 Heart, hands, mind, spirit — they all join together when we create. In the Workshop, art print from Steve Henderson Collections.

We live in a world of mass production, of products churned out on assembly lines. And because they’re made by the thousands and hundreds of thousands and millions, they’re uniform and homogeneous. Each loaf of bread, each plastic doll, each black sweatshirt with a company logo on it, looks just like its multitudinous mates.

Rarely are there unexpected alterations, the type of “flaws” we expect when an individual person starts from the beginning on a project, works through the middle, and makes it to the end. For efficiency, cost-cutting, consistency, and dependability of the final result, assembly lines are the way to go.

But if you’re looking for something unique, unusual, and with the touch of the human spirit, you need human hands touching, human brains making decisions, human hearts infusing their compassion, love, creativity, energy, joy, and purpose into what they’re making.

The artwork, In the Workshop, invites us into a place we don’t often see — Santa’s personal space where he creates. It’s understandable that Santa, because he has been doing artisan work for so long, is really good at what he makes. There are few mistakes — but intriguingly, those that exist, he works with and turns into an element of the final creation:

“Wow,” the observer marvels, “the engine is shorter and fatter than the cars it pulls — but I like it. It’s innovative.”

So it is with us when we create with our hands — whether it’s a chocolate cream pie or a knitted cap, a wooden train or a greeting card — it will probably be, like the person who made it, slightly imperfect. But it will also be something that we poured our heart into, with a result that is intangible, invisible, and unable to be touched, recorded, charted, identified, analyzed, and profited by.

It will be one of a kind, just like the person who made it.

Thank you for joining me at This Woman Writes. Posts that complement this one are

Why Your Life on This Planet Means Something

You’re Unique, So Be Unique

4 Responses to That Incredible Thing You Do (and Make)