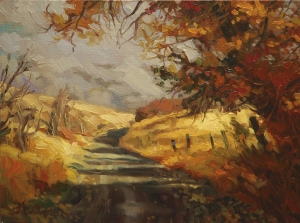 Well, the etiquette-challenged fingernail clipper is at it again.

For those of you who have been with me awhile, my weekly church attendance experience these days revolves around cleaning the local Baptist church (What I’ve Learned by Cleaning the Local Baptist Church) — up, down, and all around; toilets, kitchens, chairs and stairs, a truly transcendent time of literal cleansing and purification.

This last week I found that Zorro had returned, a pile of his — or her — fingernails cascaded across the forest green carpet like bleached coyote bones on a groomed golf course, and about as welcome.

Especially vexing about this week’s offering is that, since I cleaned last, the only “event” at the church has been a funeral.

Does anybody else out there wonder what kind of person seriously gets into manicures (dear God, I hope it wasn’t a pedicure) during a funeral?

Tired-of-Being-Youngest, who attended the memorial service with me and the Norwegian Artist (that sentence is grammatically correct, by the way, for those of you who think that I should have used “I” — we’ll discuss this at length some day), tried to remember who was sitting in that location, but she, and the rest of us, drew a blank.

Our curiosity is such that I am almost willing to suspend our self-directed, increasingly longer and longer sabbatical from church attendance to actually show up at a service and clearly identify who sits in the usual offending chair, mid section, stage right.

But not enough to give up our decadently relaxing Sunday mornings, complete with breakfasts that start around 9:30 (the same time that the service begins, interestingly enough) and end two hours and two pots of tea later, after the Norwegian Artist, Tired-of-Being-Youngest, the Son and Heir, and I (there’s that “I” again) have discussed everything from the Fingernail Bandit to the state of the world today, and how we can intelligently and sensitively respond to the people and situations in our lives. 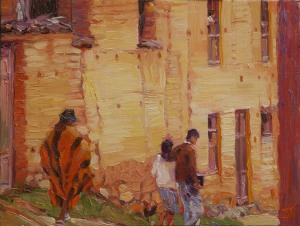 Despite the fingernail fiasco, this week’s funeral prodded me into translating the Sunday morning table talk into action as I dealt with the claims office for our shipping company concerning a painting that we had sent to one of our galleries in Arizona. Quite fortunately, the painting arrived unscathed, probably because the frame around it took the hit from the tires that ran over the box and cracked the frame straight through.

Well, that sure went over well with the Norwegian Artist.

I, however, am the manager, and it is my job to work my way through the claims process, something which does nothing toward improving one’s mood. When the claims officer informed me that not just the broken frame, but the intact painting as well, had been shipped back to us from the gallery (where we had immediately sent a replacement frame so that the painting could be hung in the gallery where it belonged), let’s just say that psalms and hymns and spiritual songs did not fall from my lips or my fingertips.

At that point, we took a break from work to attend the funeral, honoring a husband, father, grandfather and businessman who was known for his attitude of graciousness, understanding, and kindness.

If I had not been so busy coming to the realization that I had not been gracious, understanding, or kind in dealing with my shipping claims officer, whose job is not one of delivering fun packages to happy people, but rather, discussing run over packages with REALLY unhappy people, then perhaps I would have observed who was surreptitiously leaving fingernail clippings on the green carpet, mid-section, stage left.

Alas, that opportunity for discovery has passed, but it was not too late to send yet another e-mail to the harassed claims officer, offering a brief apology for my impatient demeanor. Mind you, I was still irritated that our package had been run over, and I wasn’t too excited about the painting that was supposed to be in Arizona leaning casually against the wall of our studio in Washington, but the claims officer wasn’t the one driving the truck.

The claim was settled, to our satisfaction. Whether or not the apology had anything to do with it isn’t really the issue, but what matters is that the claims officer and I parted on friendly, first-name terms, and I did not cause my mother to lament that all those years of teaching me to be a decent person went to waste.

One of the things she taught me, incidentally, was to not clip my fingernails in public. 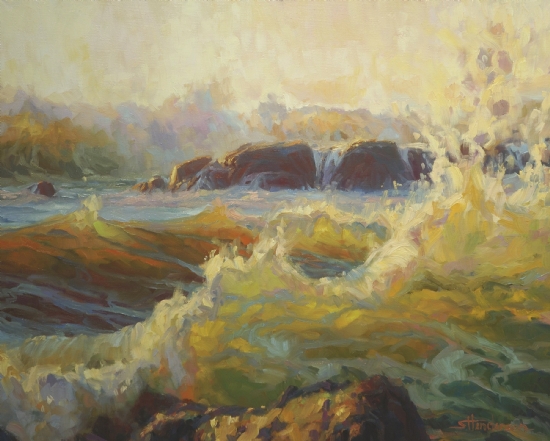 3 Responses to Zorro Strikes Again at the Local Baptist Church