The Amazing Advantage to Being Incredibly Nearsighted 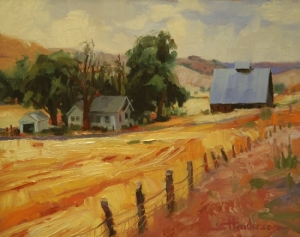 My daughter, Tired of Being Youngest, is studying genetics, which involves much contemplation of black and white guinea pigs, as well as pea plants. I do not believe that the pea plants are crossed with the guinea pigs, and I imagine that it is best not to have the rodents and the plants in the same laboratory space.

My own direct experience with genetics — aside from the all too limited two-week study of it in high school biology — involves my father, the Professorial One, who is a tall scientific genius with the eyesight of a myopic mole.

My mother, Venerable One, is a short little Polish dynamo whose eyesight is as sharp as her grasp of English grammar.

Hence, there comes their youngest progeny — a profoundly nearsighted thing with my father’s strong masculine jaw and distinctive nose, and my mother’s . . . height. Thanks to a maternal training in grammar that began before I could speak, I am well versed in nominative and accusative cases, participial phrases, and subordinate clauses, to the point that if I knew as much about science as I do about grammar, I would have been nominated for the Nobel Prize, which, incidentally, Professorial One was.

But we were talking about genetics, and while Professorial One’s genius with microbes and viruses and tropical diseases was all used up on the older siblings, he had plenty of his wretched eyesight to dump in my DNA, with the result that I began wearing eyeglasses in the third grade, when I thought to myself, “If only the teacher would write in BRIGHT RED chalk and MUCH BIGGER, I would be able to read it.”

Ah, the mind of a child. I wonder when I will discard it?

One especially tact-challenged ophthalmologist blurted out, “With eyesight as bad as yours, you must have worn glasses in the cradle!”

Fortunately, technology’s advents have enabled me to take advantage of thinner lenses, so that people actually can see my eyes through the glass, or rather, polycarbonate.

And with the inexorable march of time finding me solidly in the camp of middle age, when most people start picking up cheap frames at Mart stores so that they don’t have to tape the newspaper to the wall five feet in front of them, I find that there is a plus factor to having the eyesight of a myopic mole, namely, that though I must wear glasses to locate the giant E on the eyecharts, I only have to take them off to have the closeup abilities of our granddaughter, the Toddler.

From childhood I remember the image of Professorial One in his armchair, glasses at the top of his head, trashy spy paperback novel three inches from his face. No bifocals here.

As a compensation for receiving recessive genes from both parents’ X factors, I, too, enjoy the benefit of slipping the glasses to the top of the head, sexy starlet style, and thereby destroying the image by drawing whatever it is I am trying to read just a breath or two beyond the tip of my nose.

The Norwegian Artist, who has super powered hearing and sight, gives me a pained look every time I do that.

“That makes my eyes hurt,” he says.

And no wonder, since, at five years my senior, he of the 20/18 superlative vision had to creep into the Mart store and pick up a pair of cheaters, relying upon me, glasses atop my head, to read the little magnification numbers and direct him to the right section.

I admit to being merciless in my enjoyment of this, and have not been innocent of a comment or two, or three, or, frankly, quite a few more, but I have drastically reined myself in as I discovered, a couple years ago, that when it comes to using the computer or the sewing machine, perkily perching my glasses in my tresses doesn’t work.

It’s bad enough breathing in paper fibers while you’re reading, but it looks weirder than even I’m willing to look to type with your face brushed against the screen of the monitor, or to sew with your cheek resting on the throat plate of the sewing machine (not to mention that the needle is moving up and down way too close to not just fabric).

When I found that, in the car as navigator, I could more easily read the map by slipping the Norwegian Artist’s reading glasses over my own eye ware; and when I saw the Norwegian Artist’s ill concealed smile, I went to the ophthalmologist (not the tactless one), and announced that it was time for graded bifocals.

All comments about age-related eye issues have stopped, and I am an understanding and sympathetic helpmate to the Norwegian Artist when we are facing menus at the Chinese restaurant and he has forgotten his reading glasses.

I like both of these dishes equally well, and I just couldn’t decide between the two. Isn’t that what being married is all about? 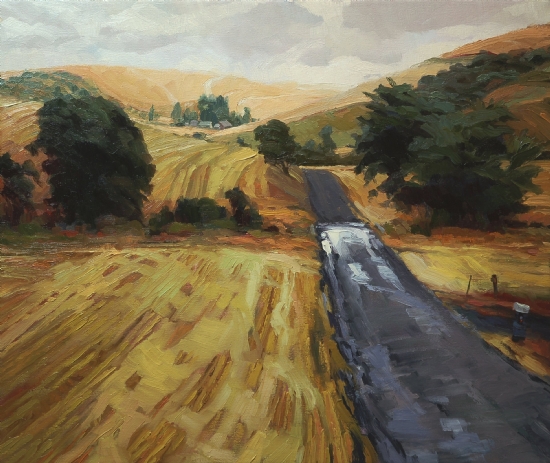 After the Harvest Rain, art print from Steve Henderson Collections.

7 Responses to The Amazing Advantage to Being Incredibly Nearsighted