The Politics of Pinching Peaches

Generally, the produce department of a grocery store is a quiet place.

Pinching peaches, while it is a dreadful practice, doesn’t result in sounds from the peaches. I imagine, however, that the people who work in the produce department scream inside when they walk by and see this being done.

Unless you want your hand slapped, do not pinch this woman’s peaches. The Fruit Vendor by Steve Henderson.

A middle-aged woman was beating an ear of corn against the edge of the display table.

(Allow me to momentarily digress: if you are a middle aged female, you are no doubt independent, feisty, and no longer paying attention to the world’s opinion around you, but please be aware that, what is “ditzy,” “cute,” “eccentric,” or “quirky” in a 20-year-old is weird when you’re over the age of 40.

There is a lamentable tendency to lump us all in a group of iron-grey-haired, frowning, bespectacled old crones — and we have to work harder than our daughters to keep our serious, contemplative faces from looking like scowling ones. Just an observation.)

Anyway, back to the battering ma’am:

After slapping that ear of corn against an immovable surface for 10 or 12 times, she nodded with satisfaction, tossed the corn in a brown paper bag, and picked up another one.

I picked out a dozen mushrooms, sight unseen because I was staring at something or someone else,  and left, the Toddler following, literally, on my heels with her dangerous child-sized cart. We absorbed ourselves in the dairy section, not that I’m especially interested in kefir. Distance from the produce section was our goal.

We escaped to the dairy section, but the quiet did not last for long. Rumination, the original watercolor, is sold, but a signed limited edition print — framed or unframed — is within your reach. Free shipping, interest-free payment plans — we sell real art to real people.

Peace re-instated, we were as deep in  conversation about Cheddar cheese as you can reasonably expect to engage in with a three-year-old when we heard it again:

She was back, in the fresh peanut butter section, smacking the plastic container against the surface of the table so that the ground legume product, which looks like something a newborn baby produces in a diaper, settled.

This woman was . . . how can I find precisely the right word?

A clanging cymbal or a whacking ear of corn?

She struck me (no pun intended) vociferously of the assortment of politicians vying for our attention this year, thwacking around and making a lot of noise but not necessarily contributing to the pleasure of our shopping experience.

Like this woman, there is much sound and fury, signifying nothing, with conversations noticeably lacking when it comes to content — why is it so hard for small ordinary people to live? Where do all the taxes go? Do the increased burdensome regulations in all phases of our existence — municipal, state, federal — really add to the quality of our lives? Why are some businesses too big to fail when small ones do it all the time? 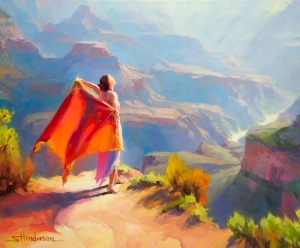 Live free — and this starts by thinking for yourself, not allowing others — the media, the political arena, celebrities — to influence your beliefs. Eyrie, the signed limited edition print, be in your home for less than you think, with options for an interest-free installment plan. Art is meant for real people living real lives.

Instead, I read about the “controversy” surrounding Mitt Romney’s release of his tax records for the last two, three, four years, and I think, “He’s rich. So’s the opponent.”

It’s highly unlikely that either one knows what it feels like to stand, four shoppers deep, in the only open lane line at the grocery store. It’s even less likely that they calculate the cost of the groceries in the basket and hope that there’s enough in the checking account to cover it. And yet we think that somehow, one or the other of them, and their parties, will lead with ordinary citizens in mind.

If you, like me, enjoy getting away from your computer and reading on your e-reader, then consider Life Is a Gift and The Jane Austen Driving School — volumes 1 and 2 or the Ordinary Life Is Beautiful series, a collection of Middle Aged Plague essays and images of Steve Henderson’s paintings. Priced reasonably at $2.99, each volume provides hours of lazy hammock reading time. I’m small; I’m ordinary; I’m self-published; and I write so that you can have a smile to your day. Please support me, and pass me on.

1 Response to The Politics of Pinching Peaches