The idols are falling left and right.

So one day I read that Lance Armstrong, the celebrated tour de France bicyclist, admitted to Oprah  that he had been using banned, performance enhancing drugs. 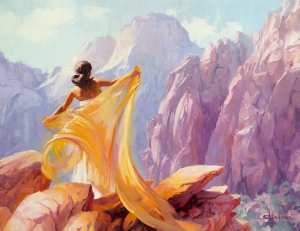 Getting to the lofty places, achieving our dreams, can be a long route or a short cut. And we all know what people say about short cuts. Dream Catcher by Steve Henderson.

Then the next day, there’s more performance enhancing, this time from Beyonce, who is reported to have lip synced the national anthem at the presidential inauguration.

Okay, so this news is, well, last week’s news, but the novelty of the actions is eclipsed by a deeper significance of what those actions represent.

It’s not so much what these people did — arguments flurry on Facebook about the acceptability of “performers” pretending to sing, a bit less sympathy for the athletes — but that they chose to give, pretty strongly, the impression that they were doing what most of us thought they were doing: actually singing, in Beyonce’s case, relying solely upon hard work and perseverance, in Lance’s.

There’s a reason why people look up to, and throw money at, celebrities like this. There is a corresponding reason why, when we discover that these celebrities fall short of expectations that they themselves exerted so much energy and publicity to establish, people walk away from them.

Not all people. There are plenty who announce, “Everybody does this. What’s the big deal?” 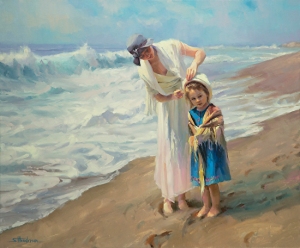 Real role models tend to be real, ordinary people doing real, ordinary things, like fixing a hat so that it doesn’t blow away in the wind. Beachside Diversions by Steve Henderson.

The big deal is that no, not everybody does this. There are plenty of ordinary, hardworking, slogging artists and actors and athletes and writers and grocery clerks and office workers and salespeople who go out of their way, every day, to do their job well, honestly, and with as much integrity as a human being can. Yes, we all screw up on a daily basis, but manfully — or womanfully — admitting those mistakes quickly, making amends, and moving on creates real celebrities out of ordinary people.

If you listen closely, you can hear the tinkie-tink as the statue falls, the role model of millions of young, and not so young, people hitting the ground and bouncing more than breaking, since everything is made of plastic these days. This is tragic, a voice over intones, simply tragic.

Actually, the tragic thing is that we create role models out of people we don’t know, who have no impact on our day to day lives outside of their face on a screen, or their voice — digitally enhanced beforehand — emanating from our phone.

The real role models for our kids aren’t so glamorous, but they are closer than we think: they drive children to their soccer games, nag them into doing their homework right and on time, walk them to the light switch and say, “See? When it’s up and you’re not in the room, it’s using electricity. This is how you put it down. You will seriously need to know this someday.” 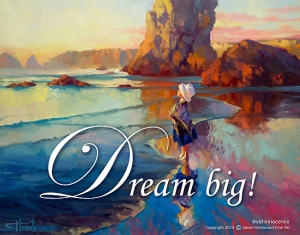 When it comes to helping our children achieve their goals and dreams, we are a pretty important factor. Dream Big poster by Steve Henderson

Real role models work hard, pay their bills, cook dinner when they feel like taking a bath, take time to answer a young child’s question, give a crabby person the benefit of the doubt, let the other person choose the biggest piece. We exist, by the millions in this country, and yet when it’s time to point out goodness, excellence, integrity, and achievement, we back into a corner and toss the kid Those Amazing Stars! Magazine.

We are ordinary people, unique individuals with abilities, skills, passions, and creativity that we can use to make our, and other people’s lives better.

So let’s just keep doing the good things we’re doing. We’re the ones who make a positive difference in this world.

This article was originally published in Thoughtful Women.