Are You Tired of Living in Fear? 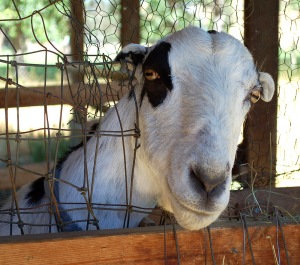 While we frequently associate Satan with goats, this is just a goat, and a very good one, because she looks out for the rest of the goats in the herd. Ironically, her name is Shai. Photo credit Steve Henderson Fine Art.

Fear is one of Satan’s best weapons, because it’s relatively inexpensive.

For a minimal outlay, Satan — who generally works through the assorted people on this planet who love him, worship him, or have sold themselves to him for whatever it costs to buy them — wields control over good people who fear the things that might happen, or could happen, but don’t necessarily have to happen.

That’s the beauty of it: in a small town or big city, the sheriff’s deputies or city police can burst into one home at  3 a.m., with all the noise and violence of a military commando operation launched against “the enemy,” — and this will frighten 10, 20, 50 times as many families into saying nothing, because nobody wants this to happen to them. For some reason, even when it turns out to be the “wrong house,” this doesn’t make things any better.

Jesus was a misfit in the religious society of His day. That says something about 1) the religious establishment and 2) following Jesus. Paperback and digital at Amazon.com.

The two most frightening things about 3 a.m. raids are that 1) they happen at all and 2) ordinary people, living ordinary lives, even consider the possibility that they could happen to them. When I was a child, we acknowledged this the norm in communist Russia, where people were oppressed and persecuted by their own government, even the most benign of individuals considered to be a potential enemy of the state.

In an earlier article, Afraid to Post on Facebook, I mentioned the number of Christians, especially in the United States, who are afraid of . . . just that — posting on Facebook, because they’ve heard that they’ll be put on a list of potential troublemakers — enemies of the state — for no more than expressing dissatisfaction with or distrust of their leadership (which is supposed to be serving the people, incidentally. Do we believe that?)

4 Responses to Are You Tired of Living in Fear?