“If you leave church, how will you fellowship?”

When a person decides to leave a group, any group, the general response from those left behind is to pressure the dissenter into staying. And the most powerful argument tends to be along these lines: 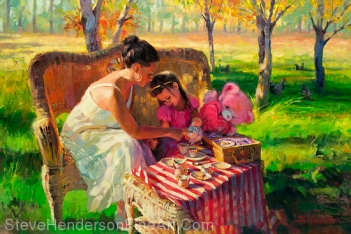 One can understand, and make excuses for, people who seek position, fame, and money; but why do Christians so little value the company of those closest and dearest to them? Why do we feel that we have nothing to give or teach one another? Afternoon Tea, original oil painting by Steve Henderson; licensed wall art home decor at Great Big Canvas, Art.com, icanvas, Walmart.com, and more

“But how will you interact with other people?” as if the wanderer, in choosing a less traveled path, eschews all future human companionship. Group participation, and group-think, is an essential component of 21st century society, and we are taught from babyhood that our primary, significant relationships are not with family, not with close (real) friends, but with co-workers, student peers, and a series of distant acquaintances we see regularly in a socially controlled environment. Indeed, many people well beyond middle school make decisions based, not upon what is best for them or their family, but what “others” will think.

Those who opt to home school field the question in the format of, “But how will you properly socialize your children?” an excellent response to this being, “It’s because we want our children to be normally socialized that we’re opting to homeschool.”

For those who dare — spiritually, socially, emotionally, and physically — to leave the conventional, corporate, multiple-weekly church lifestyle, the question is formatted as a statement, and a biblical one at that:

“Hebrews 10:25 COMMANDS us to not neglect to meet together, as some are in the habit of doing — Forsake not the assemblage of one another!” 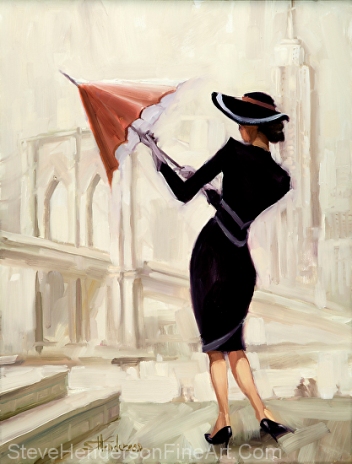 People who think and act like individuals are so much more interesting than members of a herd. We are all unique, unusual, and precious individuals. Hello New York, original oil painting by Steve Henderson; licensed wall art home decor at art.com and allposters.com.

(One has to observe, wryly, how often we are told that the Bible COMMANDS us to do this or that — obey the government, not be anxious, attend Sunday School, submit ourselves to a hierarchy of man-made leadership that benefits a few elite at the top [pyramid schemes come to mind] — while the many, many mentions of money, the love of it, and the damage that is done when one makes it one’s priority, are shuttled to the side as “optional.”)

But back to Hebrews 10:25 which, given the frequency with which it is slung at those who mention leaving the group, encapsulates the primary argument as to why we must stay. Is it possible that we are misapplying its advice?

No One-Size Fits All

Those who study the Bible for themselves and and start seriously asking questions (one hopes that this would be all Christians) quickly realize that there are few hard and fast answers, few “right” and “only” ways to look at a verse. Commonsense tells us this is so simply by the many different denominations, all of which purport to have the true and accurate rendering of the same book. So in looking at Hebrews 10:25 we ask ourselves, “Is this declaring that people should attend church services regularly?”

Considering when the book was written — in the mid 60s A.D. is a consensus — it is highly unlikely that the early Christians had developed a system such as ours today, complete with announcements, professional “worship” service, and pastor’s sermon, to the point that this was the norm for all believers. More likely, and especially in light of the persecution toward believers that is addressed throughout the book, they met in small bands, at houses, without the sense of veneration to place or pastor that those in surrounding society exhibited toward their temples and their gods (and that many Christians today demonstrate toward their specific “house of worship”).

As some of these house churches grew into organizations that fed upon themselves, what if some of the Christians began neglecting the simple getting together of one another — to eat, to converse, to pray in a small, intimate setting — in exchange for something bigger, decidedly less personal, far more regulated, and “better”? What if they began following this speaker, that evangelist, those teachers (1 Corinthians 1:11-12) to the point that they no longer valued one another as individual, equal believers, but sought out first century Super Pastors and mega churches?

Quite unfortunately, this scenario sounds normal to us today, and the other — the getting together of far fewer people  (friends, family, neighbors) in a more intimate setting to share food, concerns, spirituality, the teaching of and learning from one another, and life — is considered a psychological and social aberration. It’s not biblical, we’re told, for a cluster of ordinary believers to assemble, without benefit of clergy, leadership, scribes, Sadducees, seminary graduates, and religious PhDs. That’s how cults start.

What is normal is the Sunday morning rush, the bundling of everyone into the mini-van to arrive, breathless and irritable, to pick up the bulletin, slap on a seraphic smile, and publicly share one’s private life and deepest feelings with virtual strangers, during “prayer and share” time or within the physical circle of the “small group.”

For many Christians today, this is the single, sole, and significant form of their assembling with other believers, and — because it demands so much time from its constituents — takes the place of the other, the meeting together in small, informal, socially relaxed, normal interaction. In cases like this, one can strongly argue that they are “neglecting to meet together, as is the habit of some,” and are substituting an impersonal group activity for real, viable, human fellowship and interaction.

Jesus’s most significant teaching took place among a small circle of His disciples, to the point that, shortly before His suffering and crucifixion, He referred to them as His friends (John 15:15). Is it such a bad thing to strive and long for the paradigm that worked so well for these first believers?

Thank you for joining me at This Woman Writes, where my prayer, for the believers in my country (the U.S.A.) and other places where materialism is worshiped as a sure sign of God’s favor, is that they will separate cultural “norms” (which are fed to us through our educational, political, entertainment, and religious systems) from truth.

Posts complementing this one are

Leaving Church: Is It Rebellious, or Obedient?

6 Responses to “If you leave church, how will you fellowship?”