Posted on September 8, 2011 by This Woman Writes 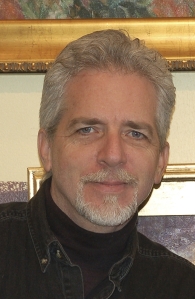 Steve Henderson, Artist, who looks to me like Richard Gere, Actor

Lately the folks at Pandora Radio, through one of their pop up windows, have been trying to set me up on a date with hot guys in the 50s, all of whom look like Richard Gere.

You’d think that, nailing my age more accurately than most of my friends, these cyber match makers would know that I already have a 50s model, who, incidentally, also looks like Richard Gere, and I’m not in the mood for a trade in.

But every morning they’re there, a roster of silver foxed studs with full heads of hair unbesmirched by baseball caps.

It’s an interesting way to start the work day.

One time, still in the morning daze and the caffeine from the tea not yet kicked in, I watched the faces floating by, all 12 of them, and counted how many truly did look like Richard Gere:

Richard Gere with hair parted to the left. 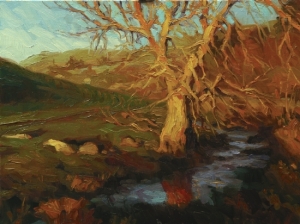 Close of Day, by the Norwegian Artist, Steve Henderson

Richard Gere with the hint of a 5 o’clock shadow.

One hundred percent resemblance to the actor, which led me to wonder, just how many men in their 50s actually look like Richard Gere?

So I did an experiment, wandering through our village with eyes open for sightings of Richard, the real one or substitutes, and discovered that, at least in our little town, most men in their 50s do not look like Richard Gere.

There’s the hair issue, for one, or lack of it — a lot of seasoned males exhibit a gleam that does not stem from their eyes. This probably explains the preponderance of baseball caps, and while we’re talking fashion here, could I put in a vote for those 1940s style fedoras so devastatingly worn by Cary Grant and Humphrey Bogart?

The latter didn’t have much hair by the way and he looked like a frog, but that didn’t stop him from being sexy, which gives hope guys, to those of you who do not look like Richard Gere.

The Pine Grove, by the Norwegian Artist, Steve Henderson

Back to my experiment: a number of men appear to extract a major portion of their recommended daily nutritional needs from malt products, not necessarily ovaltine, and their chest muscles seem a little low.

Five o’clock shadows are way overrated, those extending to the third or fourth day not qualifying as beards or goatees, not unless you want the latter term to be applied in a non-complimentary fashion.

A clean t-shirt does not have spots, especially around the armpits.

Am I being critical? Judging good men by their physical flaws as opposed to the content of their character?

Not really, I’m just wandering the streets, comparing ordinary people to a multi-millionaire who has the time, money and incentive to keep in shape, a state of thought no different than that invoked by all women when we look at Beyonce or Gwyneth Paltrow or Julia Roberts and wonder why we have wrinkles and they don’t, or our thighs are bigger, or we look pregnant even when we’re not.

We forget that we are ordinary people, with ordinary incomes, not professional actors whose job description demands that, especially if we are female, we subsist on lettuce, endive, edamame and the occasional dry, white chicken breast, all so that we can meet a fantasy industry’s interpretation of perfect.

Forget it. Accept yourself, love your mate, look beyond the sweaty t-shirt to the person underneath and get to know him or her by their funny sense of humor, a quick response to a need, the way they look in your eyes when you talk.

That’s star quality, and we’ve all got it.

Last Light in Zion, by the Norwegian Artist