Are they Brats or Simply Bored Children?

It’s not enough that the room didn’t have toys and books, it also didn’t have padded walls, which I would have used even if the Toddler did not. 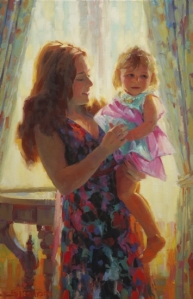 Madonna and Toddler, by the Norwegian Artist, Steve Henderson

What it did have was a flat screen, and apparently the idea was this:

While one family member disappears to the back room for an unspecified time with a dental professional, the rest of us read tattered fishing magazines or watch educational fare on the screen.

I’m sure you can guess how well the fishing magazines went over with both of us, but does it surprise you to learn that the Toddler was uninterested in obscure miniature monkeys of Borneo?

Well the receptionist was flabbergasted, having changed the movie several times for another small person, a bored four-year-old who, after 80 minutes, was probably wondering if she was an orphan.

“Now just sit here and watch the movie until your mother comes out,” the woman instructed the child.

Sumptuously attired in a red princess dress with velvet sleeves and tulle skirt, the four-year-old twirled around the room, skipped into the wall, then pirouetted in front of me and demanded,

“Doesn’t this look like a wedding dress?” which led me to believe that she wasn’t interested in the miniature monkeys of Borneo either.

Little One, by the Norwegian Artist, Steve Henderson

But for a glorious 15 minutes, she and the Toddler clambered over chairs, peered out the window, and stuffed their arms through the mailbox slot, which I agree with them was the most interesting element of the room.

In other words, they behaved like normal children in a 12 x 15 room with nothing in it but fishing magazines and a flat screen, and they didn’t sit still, and they weren’t quiet, and they didn’t just watch the movie and stop bothering people the way adults, trained to glue their eyes to the screen, expect them to.

The amazing thing about this particular office is that a healthy percentage of its clientele is under the age of 10, and while great pains are taken that the movie collection is superlative, there was not a single block, a single puzzle, a single book, a single toy of any kind to occupy a mind that races as fast as the feet that rush it around from place to place.

And so the kids climb the chairs, shove their hands through the mail slot, and act like brats, which they’re not, in this case – not only because one of them is part of my tribe – but because they’re really not interested in watching monkeys pick through one another’s hair.

This is normal, you know  — kids being active and noisy and unwilling to sit still for long periods of time, but we have forgotten this. A generation ago, parents and teachers sighed, “Kids will be kids,” and sent the beasties outside with strict instructions to run until they collapsed.

Today, however, the default is to rely upon a screen, video drugging the culprits into submission while reassuring ourselves that we are providing rich, edifying, scholastic content. It is more important to us that our child read by three than that he can climb a tree, or that she know how to run a software program as opposed to actually run.

Or that he or she just sit still and be quiet and color within the lines. This, apparently, is how the next generation of scientists will come about.

There’s a reason God gave us kids – to keep us from being old, boring, static, dull, inactive, unengaged humans who don’t know how to skip anymore.

6 Responses to Are they Brats or Simply Bored Children?