Over Pre-Occupied with Occupy, Wall Street, and Tea Parties

Posted on November 9, 2011 by This Woman Writes 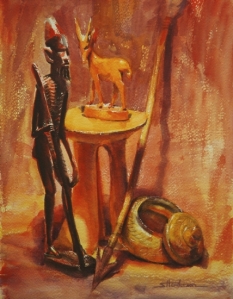 Painting, that's what the Norwegian Artist needs to be doing, not glaring at the computer. Curios by Steve Henderson Fine Art

The man spent the entire afternoon downloading a graphic design and photo software program to his computer, only to find that, in order to open the program and actually use it, he needed another download.

But that’s okay, because the second download was free, according to the big button alongside its picture that said FREE.

Only it wasn’t free; it just sort of looked that way. I’m sure there’s more to it, but the Norwegian wasn’t in one of his evocative, expressive moods.

You know the quote that says, “Beware the ire of a patient man”?

Well let me assure you that the Norwegian, normally the most patient of men, was plenty ired.

But you know, a lot of people are irritated these days; I can’t open the newspaper without seeing that yet another town is occupied by Occupiers, and when the movement reaches My Little Hometown (there was one student, with a megaphone), then I put on a pot of tea and turn to the Sudoku puzzle. It occupies me.

I like tea parties -- real ones with teapots and teacups and cookies and all. Tea by the Sea by Steve Henderson Fine Art

It’s not that I’m not irritated with the way that businesses are run these days; it’s just that I question the numbers – 1 percent – and the people being splattered with all the blame – CEOs and billionaires. Of course they’re greedy, insensitive, grasping, disingenuous, and deceptive – but let’s not limit these qualities to 1 percent of our population.

Our whole society is so infused with manipulation and deceit that it seems normal to us; there’s a reason that we distrust used car dealers, politicians, auto mechanics, lawyers, social workers, bankers and traveling salesmen who peddle miracle cures in brown glass bottles – enough of them have lied to us enough times that we label them all the same. It makes it hard for the honest ones.

But lots of people lie to us, manipulate us, deceive us. Try these:

“With price check guarantee, if the item rings up wrong, you’ll get it for free.” This is how we were assured, years ago, that replacing price tags on items with computerized scanning would not result in our being overcharged, ever. When’s the last time you received an item for free when it rang up the wrong price?

“This particular chemical in your bananas/milk/tomato/meat/shampoo/flour/bugspray is absolutely harmless and anyone who says otherwise is an alarmist.”

“The new tax will be used only for street repair.”

At grocery stores, we are prodded gently to the right, past the impulse items; young parents are scared into buying flash cards for their toddlers; seminar speakers and writers sell the “secrets” to how they made their money; even a simple country church increased its Sunday School attendance by flip flopping the unpopular program with the main service and funneling congregants, like sheep, into classes. 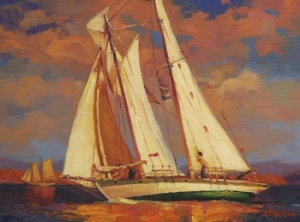 People nudge us to the right, to the left, but we really need to sail our craft true to who we are. Al Fresco by Steve Henderson Fine Art

These are the obvious examples; worse, are the subtle things we accept as normal: sophisticated peer pressure in slick advertisements; skinny supermodels in skinny jeans that regular women stuff themselves into; charts and graphs and statistics prompting us to make the “right” decision; dire headlines and dour talking heads; sympathetic characters in television shows that cause us to question deep set beliefs – manipulation, deception, dishonesty, duplicity, fraudulence, wending our way around and about the truth – these are becoming all too common in the way we do business with one another in the 21st century.

We are Occupied with the wrong things.

2 Responses to Over Pre-Occupied with Occupy, Wall Street, and Tea Parties