Round and Round about on the Roundabout

Most people, when faced with a three-hour car trip, manage to do it in three hours. 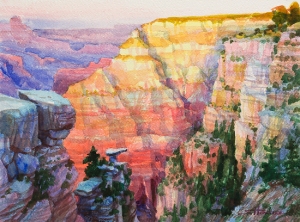 Do you see that stone wall ahead? That's pretty much what I was hitting, direction-wise. Evening Colors by Steve Henderson

But what is it my mother always used to say? “You’re not like most people, dear.”

And so it’s true, my latest three-hour car trip turning into five, not because of anything fun like an unexpected stop at a yarn shop or anything, but simply because I managed to get lost while taking a trifling detour to drop the vacuum off for repair.

Without going into why I needed to drive 70 miles to drop off the vacuum for repair when one month before it had successfully returned from its annual checkup at the shop, not necessarily with glowing reviews but certainly with no note attached saying something like, “Wind tunnel canister about to break. Will blow dust throughout the entire room and in user’s face,” suffice it to say that the people responsible for road signs, shouldn’t be.

No more. My choices were Another Town 10 Miles Away, A Major Highway Going in the Opposite Direction, and The Happy Busy Place Drive.

Yeah, I noticed that too – Boulevard and Drive are not the same word, but I knew it couldn’t be the Major Highway Going in the Opposite Direction, because I tried that on an earlier trip and it didn’t work, so I closed my eyes (figuratively, don’t freak out on me) and took the exit. 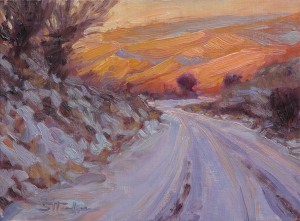 Boulevard? Drive? the difference between the two terms is a slippery slope indeed. Crall Hollow Late Afternoon by Steve Henderson

And found myself in the midst of heavy industry. Not Happy. Not Busy. Not a Boulevard.

The sensible thing would have been to backtrack, but confused by the stream of panicked verbiage circulating through the car (I was alone) I decided to rely on my innate sense of direction, the one that says, “Go this way. It feels north,” and be my own GPS monitor.

Well, that project lasted 10 minutes, when I pulled up beside two nurses on break and asked how to get to The Happy Busy Place.

“Wow,” they looked at one another. “That’s a long ways off.”

Twenty blocks, straight ahead, stay on your right, can’t miss it which I almost did because by the time I reached a right turn only lane I was at a major intersection that did not identify the major street I was turning onto.

The engineers had been at it again.

Eventually I made it, dropped off the vacuum, and described the fiasco to the technician checking in the appliance. He smiled sympathetically.

For me, getting around in the city is no drive in the county. County Road by Steve Henderson

“Next time,” he advised, “take the exit to Another Town 10 Miles Away. It will take you straight here.”

Well it’s a relief that at least one of the three exits will work; otherwise I’d be spending the rest of my days on the roundabout, getting the runaround.

4 Responses to Round and Round about on the Roundabout