Years ago, when the Norwegian Artist and I decided that I would stay home and raise the kids, this was not a savvy, astute, wordly-wise, shrewd, smart decision.

Back in the 80s, when women could do anything they wanted, by gum, and do it better than any man, the only thing we couldn’t do was stay home and be a dumb housewife. (And by the way, in case you’re wondering, the Norwegian Artist wasn’t a brain surgeon, with the accompanying brain surgeon wages; for many years he was a white collar illustrator making as much, or less than, a schoolteacher. Without the pension.)

So we functioned on a mid-grade salary, and I, the dumb housewife, stretched funds, creatively shopped, and saved money to the point that we were able to purchase land in the country and build our own home, mortgage free. This, you understand, despite my being dumb. And a housewife.

We ate well, laughed a lot, homeschooled (yep, I could read, write, and add; for what it’s worth, I have a B.A. in English, but most of my knowledge is the result of lots of reading and experience), gardened, milked goats, ran various businesses out of the home, and generally lived a life of good solid work and good solid play. We didn’t own as much stuff as our contemporaries who both pursued careers, but we always had more time. There’s a trade off.

And throughout the years, the media message was pretty consistent: smart women pursued highly professional careers, and those who didn’t, found themselves unemployed and unemployable, because, being dumb housewives, they don’t know how to do anything. (Incidentally, very little was said, or is said today, of women who work non-exotic jobs to make ends meet; when women were “liberated” to become military Pentagon officials, those  who worked “unskilled” jobs because they had to weren’t mentioned. Many of these jobs don’t seem very liberating, whether it’s a man or woman working them.)

How many jobs make us feel like this on Monday morning? Actually, mine always did, and still does. Rejoice! poster, based upon Ocean Breeze, by Steve Henderson

Several years ago, when Grandpa was in the nursing home for dementia, he panicked around every meal time, because he was convinced that he didn’t belong there and that he would be kicked out. He hovered around the dining room, afraid to return to his room because if he did, he wouldn’t have a place at the table.

All the reassurances of the professional staff resulted in nothing. Doctors were consulted; psychological theories were discussed, but Grandpa remained adamant in his fear. And then I, the dumb housewife, had a thought:

“Why don’t you put a post-it note with his name on it on the back of his chair?” I suggested.

“Couldn’t hurt,” was the reply, and the post-it note was posted.

I wish more problems could be solved that easily. Grandpa saw the note with his name on it and gave a sigh of relief. “This is my chair,” he said to the room at large. “I’m going back to my room until lunch.”

Interestingly, several weeks later, ALL of the residents had name cards at their places. I wonder where they picked up the idea?

If I wanted to apply for a job today, I would be — according to contemporary business world acumen — completely unemployable, because I can’t do anything. 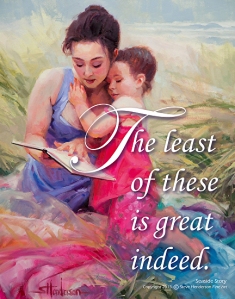 Most homemakers not only have a lot of experience we people, we also recognize that children, too, are people. The Least of These poster by Steve Henderson

Child care worker or teacher? No, no proper background. Cook? Nah. Office staff? Not enough experience with people. Municipal clerk? Unqualified, although I’m not sure how. I am totally inept, totally incompetent, totally without anything to say about nutrition, interpersonal relations, scheduling, basic finances, writing, or ideas on how to deal with a two-year-old throwing a tantrum in the midst of a grocery store.

Because I am just a dumb housewife.

I am wondering, when will women, and men, be liberated to the point that we are judged not based upon a degree conferred or a job title pasted on a plaque, but upon actual, verifiable, real ability?

You are not your job title. You are a human being, made in the image of God, with gifts, interests, creativity, skills, and ideas, and regardless of what you do during the day, or swing shift, do not limit yourself by the limitations imposed upon you by others. 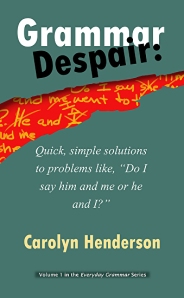 Never let anyone make you feel dumb. You’re not. If you’re afraid of writing because you’ve had bad experiences with your essay papers, please consider my book, Grammar Despair: Quick, simple solutions to problems like, “Do I say Him and Me or He and I?” There are a lot of basic writing issues, but they don’t have to be impossible to solve. Grammar Despair is available as a paperback for $8.99 or in digital format for $5.99, through Amazon.com.

15 Responses to Just a Dumb Housewife