Customer Service and Too Many Male Kiwi Plants

If you’re looking for a basil plant, or oregano, or even rosemary, you can pretty much announce this on the city sidewalks and someone will shove one of these into your hand, but if you want a tarragon plant, even a visit to a proper nursery doesn’t ensure that you’ll get one. 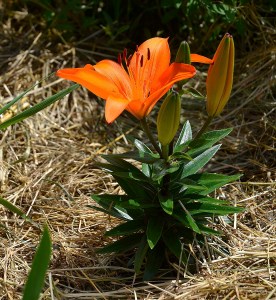 No, this isn’t tarragon. It is the Norwegian Artist’s outrageously orange lily, which we’ll encounter later in this story. Photo by Steve Henderson Fine Art

This last week, Tired of Being Youngest has been on a quest for this anise-flavored herb, and so desperate are we that we stopped into two places I swore I would never frequent again because the only people who smile and wave at us there, or seem remotely glad to see us, are the plants themselves.

Perhaps I’m quaintly old fashioned, but I think customer service is an integral part of doing business with one another. One of the nurseries I abhor is very very small; the other is very very large. At the first one, I can generally find the proprietor, gloomily shoving plants around. I’m not sure what the mood of the employees is at the second place, since I rarely encounter these people and frequently question whether they actually exist.

I’m sure they’re there, but since they don’t identify themselves by a vest or a name tag or a “Hi! I’m Bob,” button, I wander about, looking confused and helpless, hoping that someone will notice my agitation and ask me if I’m looking for something specific, a tarragon plant, perhaps? It doesn’t do any good to go to the checkout area, since that is frequently uninhabited as well.

One lucky day, when I found an employee who would talk to me, I asked about male and female Kiwi plants — you need at least one of each to produce fruit, something quite common in the animal kingdom — but all of the pots were labeled “male.”

“Do you have any female plants?” I asked.

“Oh, they’re in there. Somebody just forgot to order the ‘female’ labels and  marked everything as ‘male,'” he replied.

“Well, which ones are female, then?”

“I don’t know. You can’t really tell until they get bigger. If you buy five or six, chances are you’ll get at least one male or one female in there.”

Actually, chances are higher that I won’t buy anything from this place at all, and I never do.

It was at the third nursery, the one that wasn’t too big or too small but just right, where we hit pay dirt, so to speak. Not that we found a tarragon plant, but we were effusively greeted by the enthusiastic owner. At the time, although overhead sprinklers were watering the plants, with the serious possibility of splattering customers as well, this wasn’t a problem, because the owner and her employees dashed out and grabbed whatever caught people’s eye.

The vibrant orange of the lily stands out as strongly as the bright fabric of the Canyon Sprite. Eyrie, open edition print by Steve Henderson at Great Big Canvas

This morning, as the Norwegian was sipping his tea and admiring the plant, he mused, “We need some larger perennial bushes for this front area.”

“I know exactly the place where we can find them,” I replied.

All of the painting images in my articles are by Steve Henderson, the Norwegian Artist. You can find his art by hitting the following links:

6 Responses to Customer Service and Too Many Male Kiwi Plants