Why I — a Christian — Celebrate Halloween

For one magical night, every girl can be a princess. Enchanted, original oil painting by Steve Henderson; licensed open edition print at Great Big Canvas.

It’s okay to hate Halloween. Lots of Christians do, because they feel that the day’s pagan roots are so dreadful, there’s no room for celebration, compromise, or wiggle room.

It’s also okay to love Halloween, and I’m one of those people who do.

Halloween is one of many subjects about which good people disagree, and as a person who comes out swinging with very little provocation, I have to admit that it’s hard to keep my mouth shut when someone tells another person how wicked she is for dressing her child up as a pink bunny and escorting her from door to door with a hollow orange plastic pumpkin.

What’s worse is that Halloween gets hit from all sides — from those who decry it as incontrovertibly evil because of its roots to those who care nothing about witches and warlocks but panic at the thought of other people’s children eating candy and walking about, in the dark, at night. These are the people who feel that they, and anyone else in a village of social service workers, medico consultants, educative counselors, and government regulators, are best qualified to make decisions for ordinary parents. I think I like the first group, better.

Home, and family, is the heart of our nation, and anything that strengthens it is good. Sophie and Rose, original oil painting by Steve Henderson; licensed open edition print at Great Big Canvas.

Because, at its most elementary, uniquely Americanized base, Halloween is a family holiday.

I know. There are groups of children who wander about unattended, but even these frequently travel in a protective mass, and in years of trick-or-treating with our own kids and the generation after that, we have seen young teenagers protectively watching the five-year-old bumblebee and seven-year-old princess in their care.

For the most part what we have seen are parents — mom, dad, or both — hovering in the background as their ghost, or dinosaur, or oversized M & M — walks up to a brightly lit porch, presses the bell, and shouts/whispers/mumbles/announces, “Trick or Treat!”

The homeowner invariably smiles, and a delightful exchange between children and adults ensues as the bowl is brought out and the selection made. “Thank you!” is called out, and if not, the parent in the background stage whispers a reminder. Under the watchful aegis of that parent, a child forays into an independent moment, and he is safe on a night of magical and imaginative adventure. 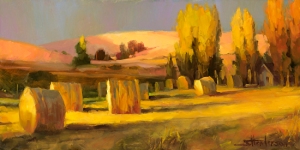 America’s greatness lies not in the people who elect themselves to be its leaders, but in its real, ordinary, hardworking people — the kind who shepherd pink bunnies from door to door. Homeland 3 by Steve Henderson, licensed open edition art print at Great Big Canvas.

And everyone is happy: the parents, because they are proud of their children and are focused on spending time with them; the children, because not only are they hauling in the good stuff, but because they are sharing this time with those proud parents; the homeowner, because it’s fun to make children smile. No school-sponsored carnival, with its age-appropriate games and emphasis on bright lights and Safe Safe Safety, can compare — nor can it draw families together into the tight, independent, self-protective units that they are designed to be.

And for no other reason than this, Christians might want to re-think their take on Halloween. It is a holiday that encourages families to venture out into the community and interact with it, on their own, without professional guidance or the supervision of any establishment. Mom and Dad are in charge — not the teacher, not the police officer, not the doctor, not the bureaucrat — and you’d have to admit that, in this day, this isn’t happening much anymore. Too many people think that our children are their responsibility, and we “share” our concerns, somehow.

Yes, Halloween has pagan roots. All holidays do, ultimately. But as

Join me at my blog, Commonsense Christianity, at BeliefNet.

imaginative human beings, we reshape and reform the celebration and tradition to conform with our beliefs, and we wind up with highly personalized forms of observing Christmas, and Easter, and Valentine’s Day, and Halloween. What is most important — and more and more vital in a society that grasps for more and more control — is that the traditions we create strengthen, empower, and fortify families.

Because families, not government, are the basis for a strong civilization.

So Halloween, my friends, may be far more valuable than we realize.

I invite you to join me at Commonsense Christianity, my column at BeliefNet, where I post three times a week. For more on Halloween, please see Three Halloween No No’s for Christians and The Big Halloween Bash.

2 Responses to Why I — a Christian — Celebrate Halloween