Living Green? Don’t Be Weird about It

Posted on December 1, 2011 by This Woman Writes

While I rarely involve myself in groupie things, I participate now and then when the reason is right. This particular event was an ad hoc assemblage of women, fabric, and sewing machines churning out shorts and shirts and knitted caps for babies on another continent. 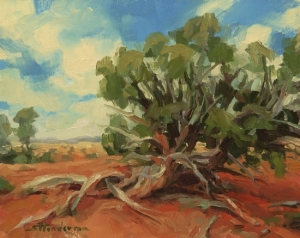 Big groups don't excite me, which is why, like this Utah Juniper, I prefer solitude or small gatherings. Utah Juniper by Steve Henderson Fine Art

At the end of the day, the leader approached me with a black garbage sack full of scraps, the largest of which was half the size of a toilet paper square.

“None of us can use these, but we just can’t bear to throw them away.

“I know you quilt. Maybe you could make a project out of these?”

I took the bag home and did what 19 other quilters in the room could not do: I threw it away.

I know you’re concerned, but don’t be. My inner green girl was fine: she recognizes a bag of trash when she sees it, and it’s beyond even my obsessive nature to piece a king-sized bedspread with fraying clumps of crumpled cloth French kissed by dust bunnies and entwined with bent straight pins.

Which is not to say that I don’t reduce, reuse, recycle, or, as the generation before me put it, use it up, wear it out, make it do, or do without. My brother laughs at my “chicken” pie, which consists mainly of meat scraps from the boiled carcass, rounded out with lots of onions (cheap), potatoes (cheap), carrots (cheap), and celery (cheap). The ratio of vegetal matter to meat would make the food pyramid people (oh wait now, it’s a plate this week, isn’t it?) swoon. 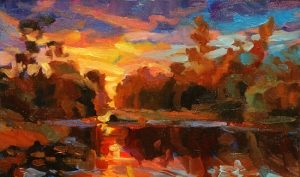 My hat of many colors was a joyous compendium of texture and tone. Awakening (study) by Steve Henderson Fine Art

Over Thanksgiving break I embarked on a knitted junk hat, a simple confection of leftover yarn from earlier projects, because when the stash grows beyond two shoeboxes full I feel dissipated and dissolute. So, surrounded by the most important things in my life – my tribe – I knit during the off moments, enjoying sibling squabblry and chaotic serenity.

One yarn – merino wool and cashmere – I bought on vacation years ago; another, camel blended with mohair, returned from a business trip; alpaca spooning with silk evoked memories of a weekend at College Girl’s lair – I unashamedly and unabashedly go for the good stuff, and I wear what I make out of it.

What’s left over goes into the plastic shoe box, and when the lid doesn’t snap shut, I knit chicken pie, but seriously, the yarn pieces need to be more than two feet in length. Enough of neurotic already.

It’s okay, at some point, to call junk what it is – trash – and throw it away. I recognize that many times, it may be another man’s (or quilter’s) treasure, but sometimes, seriously, it’s truly garbage, and the effort of packaging it, storing it, and worrying about what to do with it, outweighs the benefits of stuffing a pillow with it. Despite the wisdom of middle age, I have not found a certifiably constructive use for old toilet paper rolls, and there are only so many long cords to be contained by a cardboard tube. 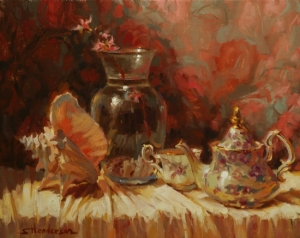 Whether you're living green or budgeting mean, it's okay, and necessary, to treat yourself to special things. Tea by the Sea by Steve Henderson

We all have a lot of stuff, too much, admittedly, but rather than reprimanding and rebuking one another into a lifestyle of fanatical austerity, why not live in reality? We can use up what we’ve got, pass it on to someone else if we don’t need it (as long as it isn’t a black garbage bag of snippets), purchase what we require, indulge in what we desire (yak yarn!) and be thankful for it all.

So buy things, wisely, for yourself and others, and enjoy them with gratitude – the same way you enjoyed the turkey, the stuffing, the mashed potatoes, the pie. Eat leftovers, make soup from what’s left after that, bless the kitties on the porch with the giblets.

I mean, somebody has to eat those things.

5 Responses to Living Green? Don’t Be Weird about It