The Economics of Being Cool — and Frugal

Being frugal is chic these days.

It’s exhilarating to go to bed knowing that you’re weird and out of step, and then burst into the kitchen the next morning as a dynamic, exciting, creative, green living, Chic woman of power and wisdom! 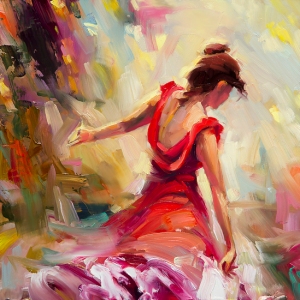 I’m so cool I’m hot these days, although I’m not the beautiful woman in the signed limited edition print by Steve Henderson.

At no point in my life have I so easily transformed from one persona to another, and what’s especially fun is that I haven’t made a single, solitary change in my life. I wish that losing weight were this easy.

But it isn’t, and neither is being frugal, actually, because despite all the articles urging us to Live Simply — Go Green and the online 10 E-Z Bullet-Pointed Steps to Saving Money Now! living wisely and well is not something that we do overnight.

It’s a lifestyle, a way of thinking which — until the economy tanked and decided to stay down there wallowing in the mud — was considered cheap and peculiar, not to mention a sign of failure because, as well all know, successful people own a lot of stuff.

But these days, successful people live within their income — a pretty good trick as many people find their disposable income going down while their expenses keep going up.

And yet, they make little decisions that add up to a big impact: instead of takeout pizza, they slap ketchup, cheese, and a piece of pepperoni on an English muffin and toast their ingenuity with a glass of wine.

Or they stop for a micro-second, hand hovering over that DVD and ask themselves, “Do I really need this — right now?” and they go home and think about it. 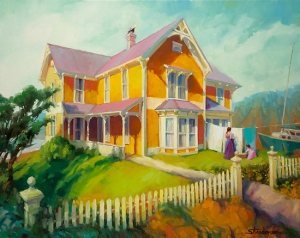 It would not take much convincing to persuade me to buy a house like this. Sophie and Rose, print and original, by Steve Henderson

“Often, the deciding factor in purchasing a house was relatively minor,” he said.

Too often, before this new economy that none of us asked for and most of us wish would go away, or at least get over its flu, the deciding factor in a purchase was what other people would think.

But now, more and more people are liberating themselves from the tyranny of how they think other people think about them — and they’re considering what is uniquely best for them and their own families.

That’s frugality — that’s where it starts — reviewing the sensibility and wisdom of a purchase based upon one’s own thoughts, desires, needs, and resources.

Years ago, we dropped a chunk of pennies on a wheat grinder which does exactly what it sounds like — it grinds wheat berries into flour. People around us were buying phones.

Nowadays, their phones are broken, gone, out of date, while our wheat grinder keeps merrily grinding along, providing that someone is physically moving the wheel around and around. And we’re cool.

“You grind your own wheat? That’s really smart.”

Smarter than your phone, actually.

We spent the same amount of money as our peers for an industrial quality clunk of metal that will never look cool, but it provides freshly ground flour for the freshly made bread that we produce in our kitchen. We eat really well.

Being frugal doesn’t mean that you don’t spend money. Many times, as with our wheat grinder, it involves making a major purchase.

Being frugal doesn’t mean that you don’t buy things. It means that you save up and buy worthwhile items that make you happy and last for a long time — like artwork. Enchanted by Steve Henderson

But it means that you spend money wisely — on something you want, will take pleasure in, and will use and enjoy for a long time to come. That could be a wheat grinder, a hank of Bactrian camel hair yarn, a work of art, or even a phone, if that’s what you really, truly want — the only thing for certain is that it won’t necessarily look like what everyone else is getting.

Not if we’re buying according to what we want and need, as opposed to what we think others expect us to have.

This article was originally published in Thoughtfulwomen.org.

4 Responses to The Economics of Being Cool — and Frugal