What “Should” Your Child Be Reading?

Reading opens up the world and the universe to us, from the time that we are very young children. Bold Innocence, original oil painting by Steve Henderson, sold; licensed, open edition print at Great Big Canvas.

I grew up in a household of books, and given that there were five kids and two parents with widely divergent interests — from molecular biology to Bobby Sherman, the singing heartthrob — there was no end of variety.

As the youngest child, I watched my siblings grow up and move away, but many of their books stayed behind. In my oldest brother’s room I discovered, and consumed, C.S. Lewis’ Narnia Chronicles. My sister’s Nancy Drew volumes filled many winter afternoons. There were science fiction, history, romance, fairy tales, western fare, and dusty tomes about insects, the colored plates separated by tissue paper.

There was even, hidden away amongst chemistry textbooks, a much thumbed copy of Everything You Always Wanted to Know about Sex but Were Afraid to Ask.

From High-Brow to Low Level

I read it all (and believe me, the sex book helped because my parents’ only contribution to elucidating the subject was a pamphlet about flowers, and while I learned something about pistils and stamens, I never did make the connection to human activity). 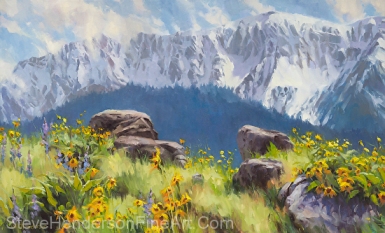 Reading takes us to all sorts of places — from the highest mountains to the deepest depths of the sea. The Land of Chief Joseph, original oil painting, 24 x 40, by Steve Henderson.

As I grew older, I explored Ivanhoe, The Good Earth, Brave New World, Animal Farm, Jane Eyre and the Vicar of Wakefield along with a whole series of cheap spy novels, thrillers, and books by an emerging author of pop horror. Nobody, ever, told me what I could and could not read.

With this background, it only made sense that when I had children of my own, I would set them loose in the household, free to explore whatever literature caught their fancy or their eye, and secure in knowing that, even if they found something about sex that didn’t reference flowers, they would be fine. Indeed, our second daughter’s not so covert — and eventually fulfilled — desire was to peruse her illustrator father’s photo reference book of the human body, which consisted of hundreds of shots of men, and women, in various poses and states of dress . . . and undress.

I can still see her face when she discovered — unknowing that her father and I were watching — a full frontal view of the human male. No pistils and stamens for this girl.

While I knew that this relaxed attitude toward our children’s reading proclivities was fairly unusual, I had no idea quite how reprobate and degenerate we were in our parenting until I listened to some — fortunately not all — of the homeschooling and/or religious community around us. Not only did many of these parents keep a tight eye on what the little eyes of their little charges saw, they actively chose what their children were allowed to read.

And generally what they chose was really really bad — not because it had to do with everything you wanted to know about pistils and stamens — but because it was sanitized literature, custom created for the conservative, religious, not particularly literary-minded household concerned that every story have a moral, uplifting, teachable message as opposed to a compelling, interesting, provocative plot.

Reading was a necessary evil, its primary purpose to direct the child to a certain way of thinking. How very, very banal.  And how very, very unsurprising that many of these children grew up to — like their parents — not read much.

Caving in to Peer Pressure

I regret to say that, for a brief period of time, we subconsciously allowed this stern, inflexible attitude to influence our own, and actually forbade one daughter to read the same emerging author of horror I had read a generation earlier. At 13, she was the same age as I was when I read the books. I don’t know what I was thinking.

(“You worried needlessly,” she told me later. “I snuck them into the house and read them anyway, and quite frankly, he was so boring that I gave up after the first 50 pages.” Funny. That’s the same experience I had.)

Quite fortunately, we escaped the harsh bonds of literary — and lifestyle — asceticism — and subsequent children read vampire and zombie tomes to their heart’s content, my only concern being that the books themselves were so shallow and market-driven that they would damage the reader’s intellect. But they emerged unscathed, and still reading.

What should your child be reading?

Thank you for joining me at This Woman Writes, where I address homeschooling and family on Thursdays. 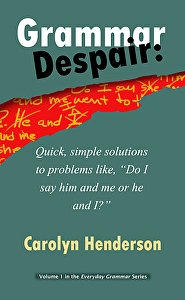 Learning to write well involves writing a lot, period. Grammar Despair addresses common issues that plague even the most well-read writers. Paperback and digital at amazon.com.

As a voracious reader who loves to write, I watched many, many homeschooling families struggle as much with teaching their child to write as they did “encouraging” them to read, and the problem was the same: they were micromanaging, subjecting the poor kid to intellect-numbing workbooks that taught writing by forcing the child to answer insipid questions, along the lines of, “Write three sentences about the scariest dream you’ve ever had.”

Rarely was the child encouraged to write what he felt like. It’s not as if the child will be a failure in life if he writes about aliens in the grocery store. The important thing is 1) that he’s writing and 2) that he’s finding it’s not so bad after all.

My book, Grammar Despair, is a skinny little tome that packs a lot in a few pages, addressing some of the major “issues” people have when they write: from whether to use there, they’re or their to how, and why, to use paragraphs. Why not add it to the jumble of books in your house?

Oh, and speaking of reading, if you’re a Christian, or a seeker of truth, I encourage you to visit me at my sister blog, Commonsense Christianity, published at BeliefNet. In the same way we strove to live peer-pressure free within the homeschooling community, we seek to live in line with Christ’s sayings, not the latest fad or fetish of pop culture Christianity.

Missional. Intentional. Authentic: Meaningless (You hear these terms in church a lot, and while they sound like they mean something, they really don’t.)

The U.S. Is not a Christian Country. And It Never Was. (Mixing patriotism in with faith — while it sounds harmless — isn’t a good idea. The word “idolatry” comes to play anytime we take the worship we owe to God, and give it anyplace else.)

God. God? GOD! Are You There? (Admit it: sometimes you feel as if God is paying attention to everyone but you.)

Salvation Is Free. Our Time Is not (Any time you say “No,” top someone, they’ll try to make you feel that you are in the wrong. It’s okay to tell your pastor, the elder, the deaconess board: “No. I don’t have time to do this. But thank you for asking.”)

2 Responses to What “Should” Your Child Be Reading?