Homeschooling and the Kitchen Wonderland

Posted on November 7, 2013 by This Woman Writes

It takes a lot of cooperation and time to build a house. Sophie and Rose, original oil painting by Steve Henderson; licensed open edition print at Great Big Canvas.

Years ago, we built our house, literally. Before we could start that project, however, we finished renovating the barn — yes, I raised my kids in a barn, at least for two years — which we lived in while we were building.

The oldest child was 9. It quickly became obvious that if, after the day’s schooling was complete, I were going to be working on nailing things and sheetrocking walls, there wouldn’t be a whole lotta time left over for cooking.

As this minor inconvenience didn’t eliminate our need for eating, we decided that cooking wasn’t a bad thing for a 9-year-old to learn. Initially, I was far less excited about this than the 9-year-old, because I’m a good cook and I like to eat well prepared foods. Most 9-year-olds are not amazing chefs.

But she became one.

While I was always on site, my having a hammer in my hand meant that I was unable to hover, querulously critiquing everything she did and taking over the job before she got it started. And while this meant that, initially, some of the noodles were underdone, or some of the casseroles overbaked, or some of the vegetables grey and mushy instead of green and sprightly, we praised what was right and literally swallowed what was not. 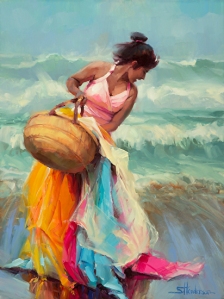 It helps to have a relaxed attitude of laughter and happiness, whether you’re building a house or eating a novice cook’s food. Brimming Over, original oil painting by Steve Henderson; licensed open edition print at Great Big Canvas.

As time went by, she gained confidence and skill, and I gained wisdom in how to teach: hands off, as much as I could. I also lowered my standards — not because she, or any child, didn’t need good standards, but because the ones we start with as adults are frequently too high for a child to reach. So we wind up pushing the kid aside, taking over, and grumbling when no one seems to want to learn.

Learning to cook — which is something too many adults in our society don’t know how to do — is an important factor in any person’s education, because people who know how to cook eat well — and cheaply. These are not bad advantages to have in an economic climate that doesn’t look like it’s going to miraculously improve anytime soon.

Cooking also encourages independence, experimentation (and do remember that experiments frequently fail), and organization, and regardless of the size of your kitchen, you can pull together a team of you and your kids to address individual tasks for a composite whole.

While some of you will turn this into a unit study, and thereby legitimize it as proper and appropriate schoolwork, you can approach the activity in a more relaxed fashion and still reap many benefits. As with any subject, each child will approach it differently, with varying results:

In cooking, as with any skill or practice, people do it their own way and follow their unique path. Highland Road, original oil painting by Steve Henderson; licensed art print at Light in the Box.

Eldest Supreme is a careful cook, not too wildly experimental, but able to produce a consistent product.

College Girl is flamboyant and quick; the Son and Heir is methodical yet willing to take leaps of faith; Tired of Being Youngest — the one who has chosen cooking as her profession — is intense, driven, yet joyous. All of them have benefited by time in the kitchen — which includes cleaning up after oneself, by the way — and the lessons learned span everything from chemistry to etiquette:

The kitchen is frequently associated with an attitude of derision, as in,

“Frumpy housewives who have no professional skills at all potter

The kitchen isn’t a limited place; it provides an unlimited landscape for creativity and skill. Field of Dreams, original oil painting by Steve Henderson.

about in the kitchen. Professional women work in offices.”

But those frumpy housewives, who may be men, know how to take raw ingredients and transform them into something that people in offices pay good money for someone else to do.

Spend time with your kids. In the kitchen. You won’t regret it.

I write about food every Tuesday, and if you’re looking for something to create in the kitchen, check out my Recipes section.

If you’re a Christian, or just interested in the subject, you can find my column, Commonsense Christianity at BeliefNet. Here are some recent posts:

10 Ways to Be a Successful Christian

2 Responses to Homeschooling and the Kitchen Wonderland