The Simple Life: Use What You Have 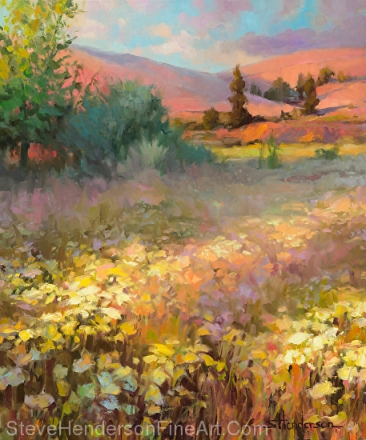 I don’t know what your field of dreams looks like, but the process of getting there involves creativity, adaptation, and the ability to use what you have. Field of Dreams, original oil painting by Steve Henderson.

It’s amazing how many people hate onions, and a good portion of the populace could go the rest of their lives without seeing one on their kitchen counter:

Anyway, last week I was making Indian Curried Chicken, and I don’t know about people who are actually Indian, and from India, but when you’re Polish and making an Indian Curried dish, you need onions, which, unfortunately, I did not have.

But because I an American Polish person, my first thought was,

“Just run down to the store and buy one. You’ve got time.”

And also, because I’m American, “run” means drive, and while it’s only 7 miles round trip (which wouldn’t be “only” if I were actually running), the end result of this errand would be 30 minutes of my time and 85 cents in gas. All for one onion, which is all I needed because otherwise, the pantry is incredibly well stocked.

And then I got to thinking, especially about that last sentence:

“The pantry is incredibly well-stocked, with the exception of onions. Why don’t you use what you have, Moja Droga (Dear) — which is varied and considerable — and make something else?” 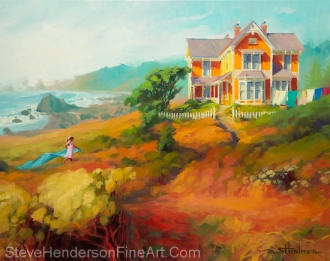 Before you run off from home and out to the store, look at what you’ve got already, and figure out a way to use it. Wild Child, original oil painting by Steve Henderson; licensed open edition print at Great Big Canvas.

So in the space of 30 seconds, Indian Curried Chicken morphed into Breaded Italian Chicken over Pasta, with the added benefit that I actually have Italian blood in my background (it’s from an ex-sister-in-law so okay, it’s not specifically in my genetic background, but at least Italy is on the same continent as Poland).

I was on a roll, living green and reduce/reuse/recycling in a big way, and when I saw a leftover homemade naan bread in the breadbox (“How come you never cook anything Polish?” you ask; I don’t know; I’ll have to ask my mother), I ground it up for crumbs in a coffee grinder that no longer has a handle, but it works if you stick a (wooden) skewer into its innards. Talk about feeling empowered!

Afterwards, I scooped the leftover bread crumbs and flour into the bowl with the eggs, stirred it up, and called over the dog: instant doggie snack!

I Am Woman: Hear Me ROAR!

At this point, I was a whirling dervish of prima donna I-Can-Do-This-I-Am-Woman, an economic force of saving and conservation to be reckoned with, when my eye landed on that morning’s tea pot, filled with soggy leaves that had seen two brewings.

Of course! That night’s beverage was to be Chai Tea, a simple matter of adding spices to the leaves, brewing it a third time, and blending the result with a little sugar, vanilla, and milk. Asian cuisine was back on the menu, boys. 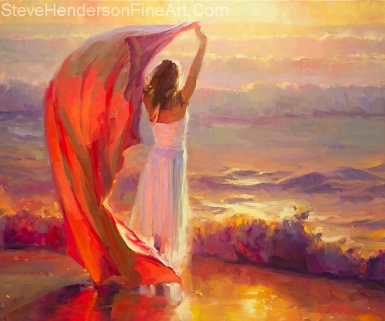 I. Am. Amazing. So are you: take some time to find out just how amazing you are. Ocean Breeze, original oil painting by Steve Henderson; licensed open edition print at Great Big Canvas.

(I would have had wine, to fit into the Italian theme, but we had 1/2 cup of white left in an uncorked bottle — don’t ask me which reprobate in the family did that, because no one’s confessing —  so I added the lost wine to the herbed tomato sauce that snuggled up against the chicken. Another score for the Pole!)

At this point, if you’re not shaking your head in awe at how resourceful and clever I am, then I suggest that you head down to the store to pick up an onion so that you can make Indian Curried Chicken for dinner tonight.

On second thought, that would neutralize the whole point of this article, which is this:

Use what you have, creatively. Not only in cooking, but in life.

If you’ve always wanted to live in the country but don’t, figure out what it is that you want to do in the country, and do it: plant a garden in the space you have, see if your city allows you to keep chickens, sit on your back porch and let the sun shine onto your upturned face. When we were in the suburbs, longing for the country, we received regular shipments of horse manure and straw onto our driveway. Because there was no vehicle access to the backyard where the garden was, we moved everything one wheelbarrowful at a time, much to the amusement of our neighbors. Despite the small yard, we ate fresh produce that we grew.

It doesn’t matter what you don’t have — what’s important is what you do have, and how you choose to use it.

Thank you for joining me at This Woman Writes, where I write about financial security and simple living (they have a lot in common) on Fridays.

If you want to know more about living simply and well, check out my book, Live Happily on Less, which is a series of essays like this one, showing you how to use what you have to improve your circumstances. If this essay gave you something to think about, imagine what a whole book of me will do.

If you’re a Christian, or interested in Christianity, check out my Commonsense Christianity column at BeliefNet. I write about things like this: High Anxiety: Conquer Your Fear; God, the Dentist; Just How Naked Do I Have to Get? and When You’re Not as Happy as You Wish You Were.