Out of Africa, by the Norwegian Artist, Steve Henderson

I confess:  I engage in reckless behavior.

Sometimes I salt my food before I taste it.

I set the cruise control for two miles over the speed limit.

If the headache’s bad enough, I’ll take two aspirin instead of one.

But perhaps my most dangerous side, my Die Hard Bruce Willis persona, comes out in my knitting:

After 28 years of being married to a reasonably observant man, I can’t resist trying to surprise him for his birthday or Christmas with a knitted gift.

We’re not talking hats here, something I can knock off in an evening, having made some plausible excuse to close myself off in the bedroom and not let anyone — well, namely my Norwegian Artist — in for a fresh pair of underwear to hang up outside the shower.

No, I do sweaters — long projects that inevitably, over the months that they take to complete — will wind up in the same room, on the man’s chair, incontrovertibly in his face to the point that he has to think,

“Olive green and black. Those aren’t her colors.”

If that sounds too refined for the average male thought process, allow me to remind you that my Best Friend Forever is a Norwegian Artist.

You know — artist, as in painter, as in someone who works with color.

That being said, he’s still male, which means that many times, while I’m doing astonishing things with pointed sticks, he’s thinking about re-graveling the driveway or fixing the door on the chicken coop or calculating the number of light bulbs around the house that have burned out, but that isn’t to say that he doesn’t have flashes of observatory moments in which he sees piles of yarn around my concentrated form and asks, like an exemplary husband should,

“So what project are you working on now?”

And that’s the alarming thing, because on this most recent task, a multi-colored knitted vest for his birthday, he hasn’t said a thing, not one word, about what it is that causes me to perch my glasses atop my head, bring the fiber project inches from my myopic eyes, (by the way, do you know that Bruce wears glasses – okay, sunglasses – too?) and undo stitch upon stitch upon stitch because naturally, since I’m working under the wire here, I’m making more mistakes in the last week before the big day than I did in the five months leading up to it.

Three days before deadline, I start a complicated (for me) buttonhole band at the same time the Toddler arrives for a visit. Commonsense dictates that intense concentration and two-year-olds do not inhabit the same space well together, but this doesn’t stop me from surging forward.

No matter that I am sitting already. I am apparently in the wrong place.

So, also, are my buttonholes, which aren’t — precisely — evenly spaced. Grounded firmly in denial, I continue knitting — faster — as if this will enable me to leave the mistakes behind. It works for Bruce on the freeway: granted, there are a few explosions here and there, a smashed bridge or two, but he always comes out okay in the end. 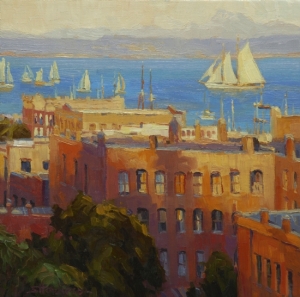 “It’s not that bad. Not really. Really.” It’s always a bad sign when I mutter. When Bruce does it, it’s cool. When I do it, it’s pre-dementia.

Darned if the child didn’t follow me into the sewing room.

In more ways than one, I admit defeat, and SIT, allowing the Toddler to slap me around for awhile until she gets bored and moves on to other destructive things.  At that point, I can focus my 55 percent concentration rate on doing my own ripping and tearing, modified car explosions.

Eventually, in the last two weeks, I had to move the project out into the open, to the point that, on a three-hour car trip to an oil painting seminar the Norwegian Artist was conducting, I knit while he drove, hoping that the scenery would keep him occupied. Fortunately, the road was winding and narrow.

At the workshop, I knit, fielding questions from curious participants:

“What are you working on?” one by one I was asked.

“It’s the Norwegian Artist’s birthday gift,” I murmured, pulling out the pattern.

Only after the workshop did I discover that I had overlooked a big chunk of the directions, and the right front of the sweater was no more a mirror of the left side than I am the twin of, well, Bruce Willis.

You know, just like Bruce’s movies, this story ties up neatly in the end, as did, incidentally, the Norwegian Artist’s birthday present.

When the man opened his gift, he acted so surprised, that I honestly couldn’t tell if he was acting.

He was good. Real Bruce-like. Sexy. Norwegian. Only he has lots of hair.