I used some blue potatoes in this dish — you can see them sliced, in the background next to the plate. Photo Credit Steve Henderson Fine Art

The other day I was standing in the kitchen, staring at the counters, wondering what I could possibly put together to eat for dinner that night.

Fortunately, my eye alighted on a basket of potatoes gathered from our garden, and I thought — “Scalloped potatoes! Yes! I can make these even if the only way I know whether there’s an ‘e’ at the end of the plural form is when spellcheck tells me so.”

(I don’t ascribe to either political party, but I always thought it unfair of the media to jump on Dan Quayle so severely because he couldn’t spell a word most people have difficulty with. Quick — spell the plural of tomato — is there an e, or not?

And regarding the ability to make verbal faux pas, which is a nice way of saying, stupid things, this is decidedly a bi-partisan skill.)

Back to dinner. Scalloped Potatoes, while they’re not necessarily quick, what with all the slicing of the potatoes, are easy and inexpensive, and if you use a decent potato that wasn’t grown to provide bagged chips for the masses, you have a nutritious meal as well. Add a salad. Or not. Depends upon how you feel after slicing all the potatoes and cleaning up your kitchen mess.

Scalloped Potatoes — serves 4 as a main dish, 6-8 as a side dish

Potatoes, 6 medium, thinly sliced (I’m talking 1/8 inch thin, but you can fudge up to 1/4 inch or so. Don’t panic. The reason the slices need to be thin is because you don’t cook the potatoes first; if the slices are too thick, the dish will take a long time to bake.) 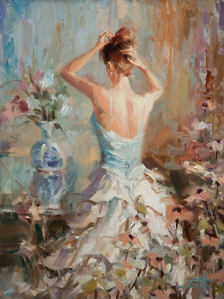 While you’re waiting for the casserole to cook, you can do dishes, read a book, or fuss with your hair. Figurative II, licensed open edition print by Steve Henderson at Great Big Canvas, Light in the Box, Amazon, and Rakuten.com

It’s multi-tasking time: saute the bacon in a frying pan until done — go for as crispy as you like. In the meantime, make the white sauce by melting the butter, stirring in the flour and salt until you have a paste, then whisking in the milk. Cook gently over medium heat, stirring often, until thickened, which happens pretty much just as the liquid mixture begins to bubble. (The sauce won’t be very thick, just mildly thickened, because that’s a lot of milk in proportion to the butter and flour.)

While the bacon is cooking and the white sauce is on its way to thickening, slice the potatoes.

Layer half of the potatoes in a greased 9 x 12 pan. Sprinkle over 1/2 cup of the cheese and all of the bacon. If you like, you can drizzle the grease from cooking the bacon over the potato mixture. Pour half of the white sauce over the bacon/potato/cheese mixture.

Layer the remaining half of the potatoes and the remaining cheese. Pour over the rest of the white sauce. Cover the dish — and by the way, you don’t have to use tin foil if you’re like me and never have the stuff in the house. I place the pan in the oven and cover it with an upside down cookie sheet. Works for me, and it doesn’t cost anything. Just be careful when you lift the sheet that you don’t scald yourself with steam.

Bake at 350 degrees for 45 minutes. The potato slices should be soft and completely cooked.

Most people, with normal incomes, feel as if there’s never enough to go around. I can’t do anything about death and taxes, but I can tell you about some lifestyle changes that will make a positive difference.

And speaking of financial health, I know how to spend money wisely and well — which is why we own our home, paid cash for our car, and have no creditors — all on a normal budget, not that of a seminar speaker. My book, Live Happily on Less, walks you through the lifestyle changes that you can make to live better on the resources you have.

No complicated workbooks, no series of video classes over several weeks, no hefty price tag. Just a book, with chatty little essays like most of my writing, $12.99 paperback (generally on sale for less), $5.99 digital, free on Amazon Prime.

I’m self published, because commercial publishers like people with recognizable names, especially ones that span more than one generation — but by the time your name is that well known, you’re not living much like a normal person anymore.

What was the old ABBA song? Take a Chance on Me.